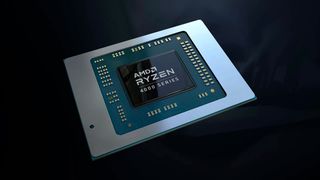 AMD VP of computing and graphics Rick Bergman said that at least one of the upcoming laptop models using the latest AMD Ryzen 4000 APUs will be able to hit 18 hours of battery life, as reported by PC World. AMD has already confirmed that the mobile processors will offer up to eight cores, and rumors are pointing to high overall performance from AMD Ryzen 4000 mobile.

In a statement at a recent financial analyst briefing in San Francisco, Bergman stated:

“We’ve moved all the way up to as much as 18 hours with our new Ryzen product.”

We'll have to hold off on judgments until we get to do some testing of our own. But if Bergman's claims prove true, these unnamed Ryzen 4000 laptops could be among the most long-lasting on the market with only Qualcomm Snapdragon 8cx-powered laptops besting them.

Ryzen 4000 mobile chips will feature Zen 2 CPU cores and the 7nm process, which should, indeed, allow them to offer significantly better battery life than their AMD-based predecessors.

AMD also gave us a hint that this might be the case when it promised that even six-core laptops could run with a 15W TDP. Granted, these chips will have lower base and boost clock speeds compared to their 45W brethren, but the difference likely won't be that significant for mainstream workloads. But if you plan to edit videos on your laptop, you might want to steer clear of the 15W versions. Low-TDP laptops tend to throttle their CPU speed rather quickly on heavy workloads, as they are not designed for long sustained work.

Ryzen 4000 may help AMD make its largest dent in the mobile market yet. Laptop vendors have had a painful couple of years due to all of Intel’s CPU shortages. Good performance from the new Ryzen chips combined with increased consumer awareness of AMD over the past few years could be just what AMD needs to make a big mark.