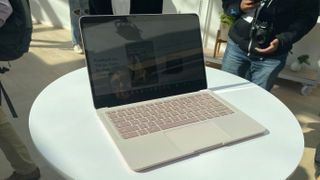 Google's newer, lighter, cheaper Chromebook, the Pixelbook Go, made its debut here at an event in New York, and we just went hands-on with the device.

The first thing to note is just how light it feels. The magnesium feels great in the hand, and the oddly-shaped ribbed bottom made it feel like I had a great grip, even one-handed.

I usually prefer black color schemes for my gadgets, but I liked the pink here, which is very subtle on the top. The bottom has a bit of an orange tint to it. Both models are far more attractive in person than they are in photos, with a playful vibe.

In my few minutes with the device, I also liked Google's "Hush" keyboard. It still felt clicky and tactile. I had to put my ear really close to it to hear it click, but I was also in a room filled with people talking.

While it is a brand-new product, the Pixelbook won't be using Intel's latest processors. The Core m3, i5 and i7  here are all from Intel's 8th Gen Y-series to keep the laptop fanless.

The display will come in FHD or "molecular" 4K, though the room was so bright it was hard to make out how the latter looked on the model we were using.

The ports consist of a pair of USB Type-C and a headphone jack. It's sparse, but if you're keeping your data in the cloud it should suffice.

Additionally, there are two far-field microphones to help pick up your voice and activate Google Assistant.

And, of course, the Pixelbook Go ships with Chrome OS. A Google representative was showing off Microsoft Office and Adobe apps from the Google Play Store, but we'll need a bit more time to evaluate the Android app situation on Chrome today.

According to Google's store, devices that are pre-ordered should ship by October 28.

If you've been lusting after a Pixelbook for awhile and have been waiting for a cheaper alternative, this looks like it's shaping up to be a cute, capable, and very portable device from the maker of Chrome OS itself.