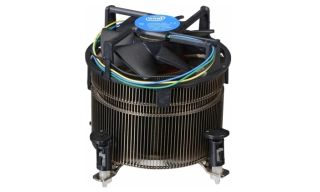 Intel announced a product change notification [PDF] on May 15 about its BXTS15A CPU cooler, clarifying that it does fit on the new LGA1200 sockets. The product itself hasn't changed, but the PCN details the new packaging that it will ship in to bring it up to date with the times.

That the cooler is compatible with LGA1200 sockets is no surprise. That's because the LGA1200 socket has a different pin count than the LGA115x, but the mounting mechanism hasn't changed.

Interestingly, Intel hasn't released a similar notice for its liquid cooler. That unit should also fit on the LGA1200 socket, though it also hasn't been available on Amazon for quite some time.

We're curious whether Intel will come out with a bigger liquid cooler to replace its current liquid cooler, given that the new Intel Comet Lake-S desktop CPUs like churning through lots of power.