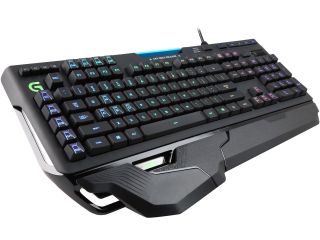 Keyboard deals are few and far between this close to Black Friday, but we’ve found a good one. Logitech’s G910 Orion Spark RGB mechanical gaming keyboard is on sale at Newegg for just $90, that’s around $40 (or 31%) off it’s usual price across multiple retailers, or $90 off if you look at Logitech’s website directly.

Logitech's G910 Orion Spark RGB mechanical gaming keyboard is on sale now at Newegg for $90 (31% off!)

Logitech's G910 Orion is a bit of an oddball when it comes to keyboards, and it’s mostly down to the fact that there’s two very similar designs, with different designations, aimed at suiting two different markets. The Spark, as seen here, and the Spectrum.

The Spark is dedicated to propelling your gaming performance forward, and the Spectrum is more of a multi-tool, typist, jack-of-all-trades affair. Both include a lot of the same features, however there’s subtle differences in the ergonomic design that have been taken into consideration to ensure that each keyboard accelerates in one area more than the other.

So let’s talk features. What do you get when you pick up either of the G910 Orions? Well they both tout a complete full-size keyboard layout. Both sport Logitech’s own home-grown Romer-G tactile mechanical switches. Both have a dedicated set of customizable macro keys (five are located on the left side, four on top above the F keys). They both have four different profile buttons for said macro keys. Both of them have a full set of dedicated media keys, including volume scroll wheel. There’s of course the inclusion of per-key lit RGB. And both have an included wrist-rest, and riser feet to help angle your board how you want it. That’s a fairly heavy feature-set, and we’ve not even spoken about the Arx dock yet (although more on that later).

So what are the big differences then between these two? Well it all comes down to the key caps and the included design of the wrist-rest. The Spark has very pronounced angular edges to each of its key caps, this helps keep your fingers in the correct position during intense rage-inducing firefights. On the other hand the Spectrum’s are a more traditional smoother design, which provide a more comfortable typing experience over long periods of time. And then there’s the wrist-rests, the Spark’s is more pronounced on the bottom left side where your wrist will typically sit when utilizing our favorite WASD keys, whilst the Spectrum’s is a more graceful full length block designed to support your wrists no matter where you place them.

Does it make a difference, absolutely, and it’s nice to see a manufacturer really consider what’s best for performance and offer two skus. If you spend most of your days away from your keyboard, and aren’t writing your next novel, having a keyboard that suits those quick 30 minute APEX sessions in the evenings is ideal. Yet on the other hand, for home working desk-jockeys like this journalist, a keyboard designed with lengthy typing sessions in mind is better suited.

The Romer-G switch has come a long way since its first inception. In the case of Logitech’s Orion Spark, it's a tactile mechanical switch with a low actuation point (1.5mm of travel and 45g of force), and almost a sense of linearity about it. It’s certainly not as loud as some of the more main-stream alternatives but the one big advantage it does tout is better RGB lighting thanks to the LED being placed directly in the center behind a light diffusing mesh.

Logitech has produced a Linear variant of the switch, unfortunately however it's currently unavailable with the G910 Orion Spark or the Spectrum RGB

Taking inspiration from Logitech’s original G15 keyboard that practically revolutionized the gaming keyboard market back in the day, the G910 Orion Spark also features an Arx dock similar to the original G15’s included display. This time around Logitech ask you sync an app up with a desktop program, and from there you can monitor system specs and stats, whilst placing your phone in the dock.

In our experience it’s a bit cumbersome to setup, but it’s certainly an additional feature that might be worth a play around. On the plus side, it’s not a permanent screen so you don’t necessarily have to have it on all the time. In fact the dock slides out to the back to let your phone sit-in, and that’s really all there is to it.

Ultimately Logitech’s G910 Orion Spark RGB is a fantastic gaming keyboard, for those who absolutely want to be at the cutting edge of performance. It’s not perfect for the typist, but for those who spend more time fragging than blogging, it might just be the keyboard for you. And if it isn’t well you can always check out our list of what we reckon the best gaming keyboard is for suitable alternatives too.