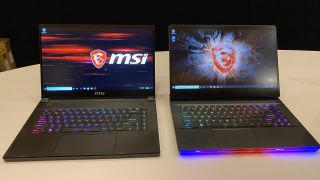 One of the best gaming laptops is about to get even better. MSI today announced that the newest version of its powerful Raider line in the GE66 Raider. It also rolled out a new member of its Stealth family in the GE66 Raider.  Due out later this year, both laptops feature Intel's upcoming 10th Gen H series CPUs and the latest Nvidia graphics.

For both systems, MSI says it will use up to 10th Gen Intel Core i9 H-series CPUs that have 8 cores, 16 threads and speeds up to 5 GHz, But is only saying it will use the latest and Nvidia RTX GPUs, so it’s unclear which generation GPU we’ll see — something ready now or in the future. Additionally, both are packing 99.9 WHr batteries. The other commonality are optional 300Hz displays.

A sequel to the MSI GE65 Raider, our favorite gaming laptop of 2019, MSI is positioning the Raider as a flagship, with a new design that looks slightly more like the Titan. It has a silver aluminum design with a “dragon armor” carving not he bottom. There’s per-key RGB on the keyboard, but also on a lighter, or “panorama aurora lighting” below the wrist rest. A limited edition version with Star Wars X-Wing stylings will be designed by Colie Wertz, who worked on the Star Wars, Transformers and Marvel franchises.

If you love RGB, the Raider's light bar will be a beauty, though we'll have to test to see how it affects battery life.

The Raider has a 15.6-inch, FHD display with a 300Hz option. An MSI rep said it will go up to 32GB of RAM, but they were still working out storage options.

The Stealth has a 15.6-inch, FHD display with options up to 300Hz. We're also told it will have up to 32GB of RAM and will likely go up to 2TB PCIe SSD storage options.

On the outside, the primary difference is ports. The Raider has everything you need, including an SD card reader. The Stealth is a slimmer machine with fewer ports but is easier to take on the go.

We don't have pricing or release dates, though it was suggested we may start seeing these laptops before the middle of the year.