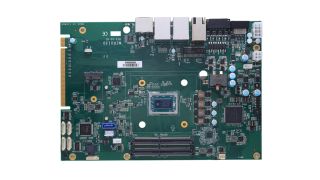 Just as The Raspberry Pi Foundation has been busy crafting the Raspberry Pi 4 (8GB) model announced today, another single-board computer maker, Axiomtek, is also at it again with another new single-board computer (SBC). Following Axiomtek's unveiling of the CAPA13R just over a week ago, it's now unwrapped the MIRU130, which targets artificial intelligence applications with the help of an embedded AMD Ryzen APU.

If integrated graphics aren't enough for you, the MIRU130 can even support discrete graphics cards via a PCIe x16 golden finger with a PCIe x8 signal.

Additionally, the MIRU130 cam support up to two displays at a time, thanks to having  a DisplayPort and HDMI port.

If you want to explore the new specs in-depth, check out the official datasheet [PDF]. The product is listed on the Axiomtek store with its own product page, but no information has been released publicly about price.