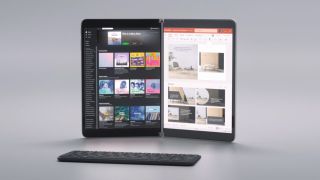 Microsoft has announced preview software development kits (SDKs) for dual-screen devices running Windows 10X, as well for its upcoming Android foldable, the Surface Duo. Not only is the company announcing standards, but it's also our first look at its vision for what software may look like on foldables running the upcoming operating system.

The initial state for software will be for an app to open to just one screen, though programs will be able to span across both of them on dual-screen devices like Microsoft's upcoming Surface Neo. The first "patterns" for apps include extended canvas, which puts an app across both screen; master-detail, which has a portion of one display highlighted on the other; a two-page view, like a book; dual view, to show different applications or views; and a "companion pane," which can surface buried options on the second screen.

Microsoft has also released an "introduction to dual -screen devices"  that details more on how apps can work. The document also goes into a lot of detail regarding how to avoid the "seam" or border between two screens. Microsoft's Surface Neo will have a hinge between the two displays, while Lenovo's ThinkPad X1 Fold is a single OLED panel that folds in half. Windows 10X has to account for both. We also expect to see designs from many more PC manufacturers this year.

That means that there are a lot of guidelines about where and where not to put certain UI elements on the screen.

Additionally, there's a preview SDK for Microsoft's Surface Duo, a foldable Android device. An Android Emulator with a Surface Duo image will be available for Android Studio.

The company is also developing standards for the web and said it is working on putting new capabilities for dual-screen layouts into the new, Chromium-based Edge.

Both the Surface Duo and Surface Neo are expected to launch by the holidays, though we expect to learn a lot more about Windows 10X and dual-screen software at Microsoft's Build developer conference in May.