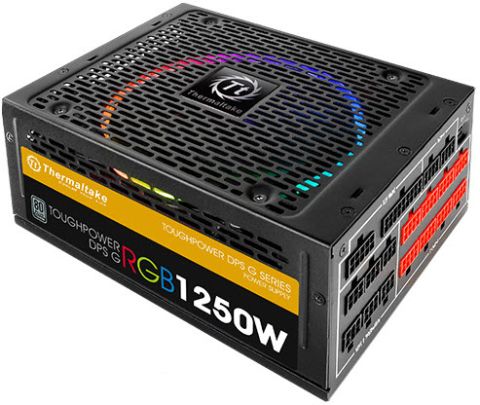 The box is large and heavy. Up front, there's a photo of the PSU with the LED ring around its fan enabled. On the front-left side, Thermaltake lists some of the PSU's features, including compatibility with the SPM cloud platform, the RGB fan, its semi-passive mode, 10 years of warranty coverage, and the modular cabling design. The TPG-1250D-T's capacity is highlighted, while the Titanium efficiency badge is really small.

One side of the box hosts an overview diagram of the SPM platform's architecture. Basically, SPM runs in the cloud and is accessible not only by desktop PCs, but also through mobile devices running iOS and Android.

Around back, a short feature list mentions the digitally-controlled fan lighting, Japanese caps, the 32-bit controller, 80 PLUS Titanium efficiency, and the complete suite of protection capabilities. Screenshots of the PSU's software depict cloud, desktop, and mobile access. A graphical list shows the available cables and connectors, and there's a power specifications table right underneath.

The PSU is surrounded by thick packing foam pieces, so its protection is adequate. It is also wrapped in a nice cloth bag with TT's logo printed on it. All of the accessories, including the modular cables, are crammed into a small compartment right next to the PSU.

Thankfully the bundle includes a nylon pouch, which you can use to store unused modular cables. Given the number of cables Thermaltake gives you, it's probable that some will get set aside. Other accessories include a thick power cord, several zip ties, a set of fixing bolts, a user's guide, a warranty leaflet, and a number of wire guides that will come handy if you want to route cables inside of your case.

The external design differentiates this PSU from its competition, though we're not fans, to be frank. At least you can't accuse it of being boring. Around front, the large, heavy-duty power switch is installed next to the AC socket. There's a label on the receptacle letting you know the power supply's fan won't spin at load levels under 50%. This is good to know, especially for owners who aren't aware of the semi-passive mode many PSUs feature these days.

On the sides, large decals depict the model number and 80 PLUS Titanium compliance. There are also a couple of exhaust grilles on the sides. The power specifications label is installed on the bottom.

The modular panel includes lots of sockets to support the TPG-1250D-T's big bundle of cables. The red-colored connectors are for the PCIe cables, while a couple of black eight-pin sockets correspond to the EPS cables (there's a label to make this clear). The main problem we see is that if you don't pay attention, you can plug a PCIe cable into an EPS connector and probably burn something, since those connectors aren't electrically compatible. You'd have to be really careless to have an accident, but it wouldn't have been hard for Thermaltake to make the interfaces mechanically different. There is also a mini-USB port available, which connects the PSU to your motherboard.

The whole top and front sides act as exhaust grilles. However, we believe that at least the top should restrict incoming and outgoing airflow less, since the PSU features a semi-passive mode. When the fan is inactive, hot air leaves the PSU from the top, provided you have the TPG-1250D-T installed with its top facing upwards.

The peripheral cables are both stealth and flat. Not only do they allow better airflow, but they're also easily hidden in cases with dark interiors. As mentioned, all of the cables should follow the same design, even if this affects the product's price.