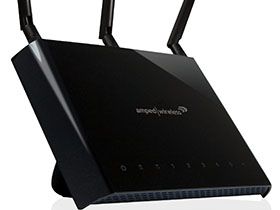 Once upon a time, Tom’s Hardware rounded up a group of 802.11ac routers and compiled a decent idea of how several of the market’s top options function in terms of distance and throughput. At the time, the article shed a lot of light and data on a product group that few people had yet brought home.

As usual, our readers and community had a lot of compliments, a few complaints and a fair amount of constructive feedback. Some of those points were predictable, such as what about comparing maximum 11ac reception distances? We were curious about that, too. As the original tester, I kept all of the original hardware and continued to monkey with it every so often. I set a couple of the routers on the window sill of my upstairs office window and measured how far they would reach down the street with line of sight. One did hold a connection down the entire block, while the other caved in one driveway shy of it.

Here’s the kicker: the next day, the test distances were different. I tried one night when temperatures dropped to 20˚F and recorded some of our best results, but I think the low temps killed my 11ac USB client adapter, which died just after I went back inside (note for future outdoor testing: change conditions gradually). Not only did the reception distances of the same router change hour by hour, but, more importantly, so did the throughput. Wi-Fi testing is notoriously erratic to begin with due to changing ambient RF conditions, but increasing distance just makes it harder. That’s not to say that 11ac isn’t an improvement over 11n when it comes to distance—we settled that in the prior article. But I quickly realized that trying to gauge true distance performance was a fool’s game. What did it matter if you figured out how far a router could reach if it took an hour to transfer 100MB when you got there?

Another community member suggested testing wired speeds on our 11ac routers. This note did make it to our list of “would be good to examine someday” factors, but we ultimately set it aside. Our Wi-Fi articles, at least for the moment, were more focused on discussing, you know, Wi-Fi stuff. Our emphasis was more on explaining the technology and its real-world implementation.

Multiple readers correctly pointed out that we should put more stress on our routers in order to test not only bandwidth, but bandwidth under load. As time goes on for this, the need for such analysis seems increasingly necessary, so we decided to make that a focal point in our follow-up. However, in thinking over how to design a methodology, we realized there were two scenarios that needed examination. First, how do routers handle efficiency under load from multiple streams? We could either test this with an arbitrary collection of Wi-Fi devices that wouldn’t match anyone else’s environment, or we could use IxChariot to create various numbers of virtual clients. Obviously, the latter approach would be more widely applicable and accurate.

Second, we realized that anyone in a real-world environment with multiple client devices is going to have another challenge to maintaining performance: interference. All Wi-Fi devices emit RF noise and, when connected, competing packet traffic. Some routers cope with this better than others. Why not see how our consumer-class contestants fared in this regard?

In short, our mission was to fill in some of the holes left by our previous testing. For various reasons, including convenience and applicability to routers that readers were likely to own if they already had 802.11ac equipment, we reused some of the better models from our last 11ac round-up and added a couple of others. This may help shed some light on whether improvements in 11ac gear yield noticeable everyday gains. Our goal here was not to perform another comparison of new equipment. Rather, we want to dig deeper into 802.11ac performance and explore some other considerations you may want to have in mind when hunting for your next router.

MORE: Networking in the Forums

Next Page The Routers
27 Comments Comment from the forums