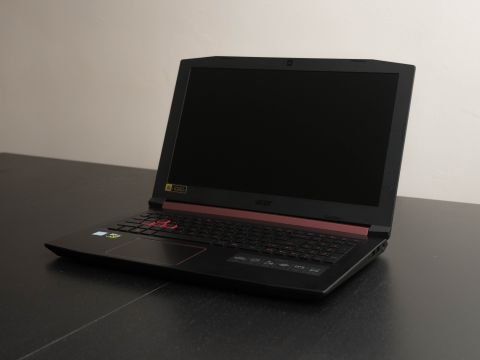 We started using Ashes of the Singularity: Escalation in our previous Digital Storm Equinox review, so we unfortunately don’t have enough test subjects to compare against the Nitro 5’s score. With the graphics set to Ashes’ Crazy preset with MSAA set to x8, the Nitro 5 barely makes a dent. You can compare the performance to a flipbook. Settings will need to be reduced dramatically to play Ashes with confidence.

Grand Theft Auto V is one of the more demanding titles in our suite, but the Nitro 5 delivers respectable performance during most of the benchmark scenes. The only exception is the Vinewood Sign scene, which is notorious for dragging even the most powerful gaming systems to their knees; for example, the Triton only barely manages 40 FPS. Interestingly, the Nitro 5 doesn’t show a notable improvement over the Sager.

Hitman is particularly CPU intensive, so throwing an i5-based laptop at it doesn’t sound like a great idea at first. However, the Nitro 5 fares surprisingly well, delivering a respectable 43 FPS, even at high settings. Comparatively, the Sager delivers about 7 FPS less than the Nitro 5 on average, despite having an i5. The only definite winner is the Dell, whose Max-Q GTX 1060 pulls its performance to a comfortable 50+ FPS. The Nitro 5 can easily reach this with graphical tweaks.

Middle-earth: Shadow of War is a new addition to our laptop gaming benchmarks, so we don’t have any comparisons to draw yet. With graphics set to Ultra and using FXAA, the Nitro 5 manages playable frame rates. Reducing the settings below Ultra will yield a massive boost in frame rate.

Rise of the Tomb Raider is one of our favorite benchmarks because it can bring even high-end systems to their knees at maximum settings. Tomb Raider features a GPU-bound workload, so your CPU won’t make a major impact on your performance. While this is great news for an i5-based laptop like the Nitro 5, its utter lack of GPU horsepower nets it an unplayable frame rate. The Inspiron performs about 51% faster thanks to the Max-Q GTX 1060, but still cannot breach the 30 FPS threshold.

Our final gaming benchmark is The Division, a platform-based title that can be demanding for budget laptops such as our Nitro 5. Luckily, its GTX 1050 TI and Coffee Lake architecture keep it in contention with the Sager and the Asus laptops, landing it just barely above 30 FPS. As always, you can adjust the graphics to your liking for better results.