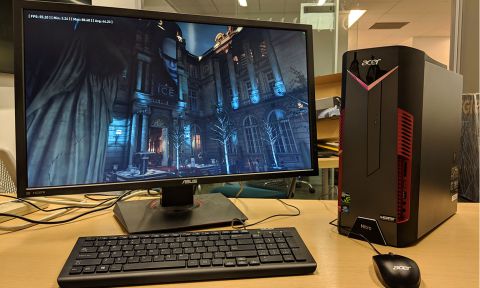 The Acer Nitro 50 is an affordable gaming desktop with the latest ports like USB Type-C, but it offers mixed performance and is filled to the brim with bloatware.

The whole point of Acer’s Nitro series is that it offers gaming on the cheap. And the Nitro 50 desktop ($799.99 to start,  $1,199.99 as tested) does hit a sweet spot, including our review unit, a VR-ready desktop just over $1,000. But while the Nitro is affordable, it’s the result of a bunch of compromises, including mixed performance and a ton of bloatware. And if you’re hoping to upgrade it later, you’ll face a bit of a challenge. But it’s still cheaper than competitors, and that may be enough to swing some.

The Acer Nitro 50’s case has a vaguely robotic theme. The front is mostly black, with a red, lit-up “V” near the top and below Acer’s logo. On each side of the front of the case are two red, vented accents. The front I/O ports (see: Ports and Upgradability) are located on the red area on the right. The DVD drive is vertical and runs down the middle of the case, and there’s a small “Nitro” badge on the bottom. There’s no glass or acrylic here--just some holes on the left side to let hot air escape.

Acer’s desktop isn’t hurting for ports. On the front are an SD card slot, USB 3.1 Gen 2 in both Type-A and Type-C and headphone and microphone jacks. The back of the case is where you’ll find four USB 2.0 ports and a pair of USB 3.1 Gen 1 ports, as well as Ethernet, mic in, line in and speaker jacks. Additionally, there are three DisplayPort jacks, plus HDMI and DVI attached to the GTX 1060.

You need to remove two screws from the back of the Nitro to remove its side panel, which is disappointing when so many desktops can be opened without any tools at all. And when you get in, it’s pretty cramped. A small stopper holds the GPU in place and folds out. The CPU fan and GPU are immediately accessible, as is the power supply at the top of the case. Depending on the size of your hands, you may have a tight squeeze if you want to upgrade the RAM (which was disappointingly single-channel in our review unit) because the slots are between the CPU fan and a part of the motherboard blocked off by metal shielding. If you use aftermarket RAM, it’s possible it would be too tall to fit next to the squat fan unless you replace that, too.

In addition, the HDD and the optical drive are behind the shielding, so those parts are difficult to upgrade or replace.

With a GTX 1060 and 6GB of graphics memory, the Nitro 50 is a solid performer for games at Mid-Range and High settings. I played Middle-earth: Shadow of War on Very High settings at 1920 x 1080, and it ran between 49 and 60 frames per second (fps), even while I combatted some orcs and an Olog and when I was ambushed in a cavernous fortress by Pushkrimp the Gambler.

The odd game out was Rise of the Tomb Raider. The Nitro played it at just 39 frames per second, which is less than the Strix (74 fps) and XPS (64 fps, Nvidia GTX 1070), as well as the 68-fps average. This could be chalked up to a few factors, including the fact that the high-performing Strix used an overclocked processor (the Intel Core i7-8700K).

On the SteamVR performance test, it earned a score of 8, beating the Strix (7.1) and making it VR-ready for the Oculus Rift and HTC Vive.

The Nitro packs an Intel Core i7-8700 CPU, 8GB of RAM and a 1TB, 7,200-rpm HDD paired with 16GB of Intel Optane memory, which is more than enough for most productivity tasks. Browsing with more than 20 tabs open, including streaming video from Twitch was no problem.

The Nitro completed our Excel macro test, which pairs 65,000 names and addresses, in 36 seconds, just behind the Strix and a second faster than the average.

The USB mouse and keyboard included in the package are good enough to set the machine up, but you’ll want to replace them when it comes time to actually playing games. The mouse has just two click buttons and a scroll wheel and feels like cheap plastic (because it is).

The keyboard also feels substandard. The black plastic is slippery, and the letters and numbers appear to be stickers applied to the keys. I was able to hit my usual 107 words per minute with a 2 percent error rate, but the keys were stiff.

The only notable software from Acer we found in our review unit was Care Center, which runs hardware checkups and offers support resources. Other than that, the Acer Collection is just a list of additional partner apps that are of limited utility.

The bloat Acer added includes Amazon for Windows 10, Firefox (better than Edge, but with some pre-installed extensions you may not want), Booking.com, eBay, Netflix, Dashlane, Evernote, a couple of card games, Stagelight and PowerDirector and PhotoDirector.

I’ll give Acer this--it made an affordable gaming desktop that is cheaper than competitors. And while its gaming performance is solid, its productivity performance is mixed, including slow hard drive speeds. And while you can open it, many of the components are difficult to reach and upgrade. Plus, Acer drowns Windows 10 in bloatware, which is just unpleasant.

Asus’ ROG Strix GL12 offers better design, strong consistent performance and an innovative hot-swappable SSD bay. However, with its overclocked processor and eSports branding, you’ll have to pay more ($1,449 for similar specs), and there’s still a bunch of bloatware.

If you don’t want to build a PC and need something affordable, the Acer Nitro 50 will get you gaming. But if you save up, you can get something faster.