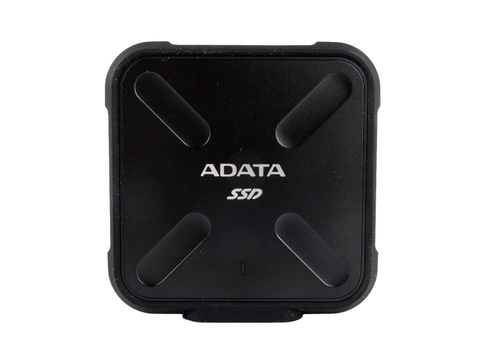 We consider the Adata SD700 a solid follow up to a good product line. This new series improves on Adata's other portable SSD products and adds IP68 rated hardware for the price of a desktop SSD. This drive also delivers exceptional performance in a category often filled with aging legacy technology.

Adata moved its production over to 3D NAND and revamped its entire product line just a few months after it released its most aggressive portable SSD lineup in history. Many of the new products retain similar names and model numbers, but the SD700 emerges as a new product with rugged specifications.

The era of planar (2D) NAND is over unless you buy an SSD with Toshiba NAND, but that will end soon, too. Micron cranked up its 3D NAND production, and now third-party SSD manufacturers have trouble securing older 2D flash. The 2D spigot isn’t completely shut off, but most older 2D designs serve guaranteed supply contracts and are destined for specialty components, such as the auto industry.

3D will join the likes of stereophonic, color, surround sound, and 4K. These are all technologies that were buzz words at one time or another but quickly became standard. By next year, 3D NAND will not be an option or even a bullet point on a specification sheet. Between now and 2018, though, many products will "feature" (say it with a repeating echo) 3D NAND.

We've actually had 3D NAND for many years, but it only came in Samsung products. Samsung paved the way and taught us that the technology increases endurance over modern planar (2D) NAND. It also resets the lithography clock in many cases, which gives companies a new path to innovate for increased performance and reduced price.

Adata based many of its new portable products on the Ultimate SU800 2.5-inch SSD we tested in a desktop and notebook environment. The base drive uses a modern controller loaded with advanced technologies designed to prolong endurance and sustain high transfer speed. For several years, aging technology cobbled together to drain leftover NAND stock plagued the portable SSD category. This year, companies got serious about making external SSDs as advanced as what's inside the beige box.

The Adata SD700 utilizes the Silicon Motion, Inc. (SMI) SM2258 controller paired with Micron's 384Gbit TLC 3D NAND. The combination leaves us with some interesting raw capacities. You get access to 256GB of data capacity, but there is 288GB of raw NAND inside the case. Adata programmed the extra space for SLC writes, background operations and wear leveling. The larger the drive, the more space there is to write data to the SLC programmed area. All three capacities share the same performance specifications but offer different real-world performance, especially when you transfer large amounts of data. For what it's worth, the SD700 series reads sequential data up to 440 MB/s and writes sequential data at 430 MB/s. Your mileage may vary, though.

Going beyond the speeds and feeds, the SD700 has an IP68 rating. This is one of the highest IP ratings we've seen on a portable SSD. Most of the products we've tested have an IP65 rating. The ratings quantify the water resistance level. IPx5 provides splash resistance, but IPx8 offers total resistance during immersion up to a specific depth. The IP6x portion denotes dust resistance. In this case, the products are completely resistant to the ingress of fine dust particles. We should note that the SD700, and the other portable SSDs we've tested, are only certified for these conditions with a door or some type of blocking device installed.

We found the Adata SD700 available in two capacities of 256GB and 512GB at both Newegg and Amazon, though the 1TB option wasn't listed. Amazon has both color options available, but Newegg only has the all black version we examine below. The 256GB portable SSD retails for roughly $109.99, and the 512GB model sells for $189.99. All SD700 portable SSDs carry a 3-year warranty.

The Adata SD700 doesn't come with an expansive software package, but it does work with Adata's SSD Toolbox. Adata originally designed the software for its internal products. The software allows you to check the amount of wear to the flash and to perform some maintenance functions, such as secure erase operations.

The SD700 pays tribute to the Ultimate SU800. The package uses the same Chroma reflective blue design as the 2.5-inch SSD. Inside the package, we found the drive, a USB Type-A to USB Micro Type-B cable, and a paper quick start guide.

The SD700 is smaller than the Adata SC660 and SV620, but larger than the SE730. We compared the three products in this roundup-style review. The SD700 differs from those products because it leverages a rugged design built for active users and professionals on location. Unlike some of the other products in the rugged category, you don't have to pay more for robust features over a portable SSD designed for regular home and office use. For several years, the rugged category came with a stiff up-charge, and in many cases, the premium was quite high.

Overall, we like the SD700 design, but we can make some suggestions as well. At this point, every product should take advantage of the USB Type-C connector. It doesn't increase performance, and it doesn't change much, but it makes connecting the drive easier while boosting the adoption rate of a superior connector.

Adata recessed the USB connector back into the housing. This reinforces the USB plug and makes it more difficult to break the connector where it mates with the board inside.