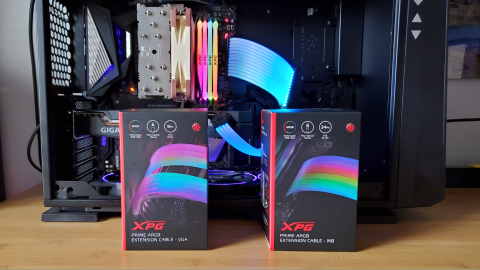 Adata’s XPG Prime ARGB Extension Cables bring some pretty competition to Lian Li’s Strimer Plus. But their design makes them very inflexible and less versatile than the competition.

Competition is a good thing, especially in areas like RGB accessories where there’s plenty of room for improvement. That’s why we were excited to see Adata was offering up its own set of ARGB extension cables to compete with Lian Li’s Strimer, which is now on its second iteration, the Strimer Plus.

The XPG Prime ARGB Extension Cables look good and feel more solid than the Lian Li alternative. But rather than adding the lights on top of the underlying sleeved extension cables like Lian Li does, Adata’s design wraps the light tubes around the top set of cables. In some ways, this looks better, but it also leads to major installation issues. The cables don’t bend well beyond the straight arcs you see below. This can be an issue if, like with the InWin 309 case we tested them in, there isn’t a motherboard hole to route them through that’s directly below or to the side of your graphics card and/or motherboard ATX cable connector.

There are a few other issues with the design, which we’ll delve into below. But while the XPG Prime ARGB Prime cables are a decent first effort in an area without much competition, Lian Li’s second-gen Strimer Plus cables are a better option for most builders who want to add some color to their case interior.

As of this writing, the VGA version of the XPG Prime ARGB is listed on Amazon for $33 (with stock promised to arrive on June 12). That’s a few dollars cheaper than Lian Li’s Strimer Plus (selling for $36.66 when I wrote this). The ATX version has an MSRP of $49.99, though it wasn’t showing up for sale anywhere yet when I wrote this. An Adata rep told us it, too, should arrive at various online sellers by mid-June. While prices vary between sites, in general, Adata’s cable set sells for roughly similar pricing as Lian Li’s latest alternative. Either way, to add both VGA and ATX RGB cables to your system, you’ll be spending between $80 and $90.

Adata’s VGA cables are listed as being 220 mm long (8.6 inches) with the VGA variant at 222 mm (8.7 inches). For more compact builds, this is probably fine. But in the InWin 309 case we installed the cables in, they were actually too short to reach the cable routing holes, forcing me to pull some of the non-lit primary power cables (that these extensions plug into) through the hole in the motherboard, leading to a less-seamless look.

Lian Li’s Strimer Plus VGA cables are longer, at 300 mm (11.8 inches), while the ATX cable is technically shorter at 200 mm (7.9 inches). But it’s not as simple as length. The XPG Prime cables are more or less set in a rough arc, because the lights and the clamps that hold the circuitry on the cables are permanently attached.

Lian Li’s Strimer cables (both the original and the newer Plus models) on the other hand, have lighting sections that clamp on top of the extension cables, connected to combs that can be slid up and down to better bend the cables to their desired position. Also, with the Strimer cables, you can disassemble the combs and flip the lighting around to the other side of the cable to maximize the portion of the light tubing that’s directly visible through the side/window of your case.

Not so with the XPG Prime ARGB cables. Its lights are permanently affixed to one side of the cables. This meant that in our test setup, a large portion of the VGA cable’s lighting, particularly when viewed from slighting above eye level, was partially obscured by the while sleeved cables on the “underside” of the kit.

That last bit might be a small detail, but it’s just one of a few ways that Adata’s RGB cables just aren’t as versatile as Lian Li’s Strimer Plus. The only solid win for Adata’s device on this front is the fact that its VGA cables actually come in two separate sections, unlike with the Strimer Plus. So if your graphics card only has one six- or eight-pin power connector (as was the case with the RTX 2060 Super we used in testing), you can just plug one set of cables in.

With the Strimer Plus’ VGA cables, the plugs and lights for two sets of cables are permanently attached together, so you’ll have to plug both in, and have one end plugged into nothing if your GPU doesn’t have two sets of supplemental power plugs.

A couple other downsides to the XPG cables: If your case doesn’t have a space below the graphics card to route VGA cables, forcing you to twist the cables sideways, you may notice what looks like small cracks in the light tubing if you look close.

Also, on the ATX cable, the rigid black plastic housing on both ends of the light tubes is three inches long. That made it too big to fit through any of the cable-routing holes on our InWin case. The result: Both of these rather unsightly black plastic boxes were visible inside the case. Ideally, you’d be able to shove one end through behind the motherboard. But at least with this case, the cable’s plastic housing was too big for that.

These are minor aesthetic issues to be sure, but when you’re dealing with a set of accessories that do nothing but add lighting to your case, aesthetics are the primary concern.

One other thing that Adata’s RGB cables get right: The RGB controller box the company provides is tiny and easy to to stow inside a case at just 1.5 inches long and 0.75 inches wide (compared to the much larger 2.2 x 3.3 inch box of the Strimer Plus), while its two buttons (mode and speed) give you all you need to cycle through light settings. And yes, one of the modes is “off” for those times when you don’t want your lights blinking at you through the side of your case.

While I’ve spent much of this review pointing out how the XPG Prime ARGB Extension Cables don’t quite stand up to the Lian Li-made competition, there’s still a fair amount of positives overall with Adata’s RGB cables. They look good with the lights on or off, and they feel more solid and less fiddly than the Strimer Plus cables (though that comes at the cost of less flexibility and versatility).

Adata’s XPG Prime ARGB Extension Cables bring some competition to Lian Li, and effectively double the size of the market for RGB power supply extension cables. But they aren’t as versatile or flexible as what you get with the Strimer Plus cables, and the only “new” feature Adata brings to the table is the fact that its VGA extension cables come in two separate pieces, so you don’t have to install both sections in your case if your graphics card only has one supplemental PCIe power connector.

We’re glad to see another company taking on Lian Li and giving builders more options for adding attractive lighting to our PCs. But most people would be better off with the Strimer Plus.