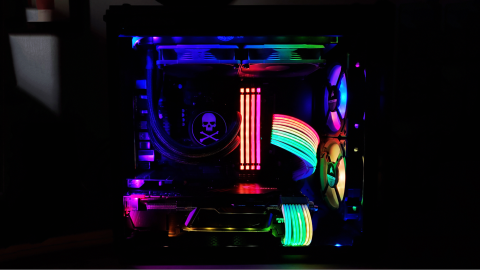 Lian Li’s updated Strimer Plus sports improved lighting and build quality and a better controller box. It’s one of the most striking RGB products you can install in your PC.

Lian Li’s original Strimer mostly impressed us last year by bringing eye-catching customizable RGB lighting to internal PC cabling, landing first in the form of a 24-pin ATX power extension cable, then a few months later in the form of a dual 8-pin PCIe model for plugging in to your graphics card. But we had issues with the build quality and the lack of an off button on the included expansion slot RGB controller.

Now the company is back with a sequel, the Strimer Plus, which mostly improves on these issues, while also refining its looks. The controller box now includes an “off” setting and the overall build quality is better, though still not perfect. The Strimer Plus looks much better than its predecessor overall (there are no more exposed screws), includes more and better lighting effects, and arrives out of the gate in both 24-pin ($59.99) and PCIe ($39.99) forms, for those who want to maximize their RGB cable bliss.

But you’ll still need lots of room to stash extra cable length behind your motherboard (or somewhere else out of sight), so the Strimer Plus isn’t a great fit--literally--for compact PCs or cases without ample cable room. And the PCIe cable kit still makes little sense unless you have a graphics card that requires two supplementary power connectors. Also, the pricing has increased to the point where installing both cables in your PC will set you back $100--though Lian Li says if you order the 24-pin model from Newegg, Caseking, or Overclockers UK during the first month of availability (2/26- 3/31), it will be available for $10 off ($49.99).

The Strimer Plus is slated to arrive at retail on February 26 as both a 240mm (9.45-inch) 24-pin extension cable and a 14-inch dual-8-pin PCIe kit for graphics cards. The cables themselves are sleeved in white and fairly standard. But atop the cables sits a series of light tubes (12 on the 24-pin model and 8 on the PCIe model).

This time around, rather than the lights floating above the cables (as seen in the original Strimer on the left in the image above) , they’re embedded in white rubber strips (seen on the Strimer Plus, right). This both helps the Stimer Plus look better when the lights are on and off and helps improve build quality. Unlike with the original Strimer, none of the tubes disconnected from the ends of their holding brackets during out testing of the Strimer Plus.

Speaking of the brackets that hold the light tubes onto the underlying extension cables, these have been improved as well. The clear comb-like clips have been moved to the underside, and on top there’s now just a black clip at the front and one at the back. There are no more exposed screws to mar the aesthetics, either. But there’s still room for improvement here, as those black brackets that hold the lights onto the cables have a tendency to come apart when you bend them, and it can be tough to clamp back together once the device is installed.

Installation is fairly simple, although you’ll probably do a fair bit of fiddling to get things just the way you want them. For the 24-pin model, you plug one end into the standard 24-pin cable from your power supply and the other end into your motherboard. Lian Li says you’ll need 1.5cm (0.6 inch) of clearance behind your motherboard to use the Strimer, which frankly doesn’t sound like enough. We suggest using the Strimer with a case that has copious space to hide cables, as you’ll have to shove the rest of the bulky 24-pin power supply cable (and your PCIe cables as well if you’re also installing that model) behind the motherboard tray, inside a PSU shroud, or somewhere they aren’t visible.

For the sake of aesthetics (which is kind of the only point here). you’ll only want the Strimer cable poking through your case’s routing hole. The Corsair Crystal 280X RGB case that we used for our test build made stashing the extra cabling easy, but it’s also significantly wider than most cases. Just be aware that you’ll need plenty of space for cable stashing if you opt for the Strimer Plus.

That’s not all there is to the installation process, though. For power, the Strimer Plus plugs into a SATA power connector from your PSU, and if your motherboard has a 5V ARGB header, you can plug your RGB cables directly into the motherboard for control via all major motherboard makers’ RGB software. But for those without the requisite header, the 24-pin model also comes with an RGB controller box that’s a big improvement over the three-button expansion bracket that shipped with the original model.

The roughly 2.2 x 3.3 x 0.4 inch black plastic controller box lets you cycle through effects and colors, as well as adjust the brightness and the speed at which the lights flash or slide along the cables. In total, there are 19 different effects, including the most important one missing from the original Strimer: Off. No matter how much you like RGB lights, there will always be a time (when watching a movie or doing some work at night) when you’ll want your PC to be on but the light show to be off.

We tested the Strimer Plus solely with the controller box, as the ASRock B450M Pro4 motherboard we used only has a 12V RGB header. Given that there’s at least a way to turn the Strimer off via the control box (though you do have to cycle through all the modes until you get to the off setting), I was happy enough to use the controller box for testing purposes.

That said, with 3-4 cables going into and out of the box (depending on whether or not you have both the 24-pin and PCIe/8-pin model installed), there’s no easy way to elegantly mount it outside of the case for frequent color and mode adjustments. So the Strimer Plus is likely far more appealing/practical if your motherboard actually has a 5V ARGB header to plug into. That setup will obviously also give you much better lighting coordination with any other compatible RGB components inside your system.

There’s one other potential issue for the PCIe version of the PCIe version of the Strimer Plus for graphics cards: It’s pretty much only designed for cards that need two PCIe power connectors. The lighting portion has 8 LED tubes that span the width of two 6/8-pin PCIe connectors, and the light portion can’t be separated. So if your GPU just has one 6- or 8-pin connector, the second connector is basically going to be stuck there next to your graphics card, not connected to anything. For a product that’s all about making things look good, that’s not ideal.

The Strimer Plus is a solid improvement over the original Strimer, both visually and in terms of build quality and design. There’s still room for improvement, as the black plastic clips/cable combs that hold the power wires to the lighting tubes have a tendency to become disconnected or misaligned during the installation process, and can be difficult to fix once the cables and lights are installed.

Also, at $60 for the 24-pin model and $40 for the PCIe/GPU cable kit, the Strimer Plus is pricier than the original Strimer, which debuted at $40 for the 24-pin model and $30 for the PCIe version. The improved aesthetics and build quality are arguably worth the extra money, although if you opt for both Strimer sets for maximum RGB cable effect, the total outlay is now $100 (outside of the initial one-month launch winder when Lian Li says the 24-pin model will sell for $10 less than the normal price). That’s likely to put more people off purchasing, especially considering that older models can often be found for around $30 each.

Perhaps the street pricing on the Strimer Plus will wind up lower than MSRP as well. But if you just buy the 24-pin model, the $60 price is easier to swallow, and it’s hard to think of another RGB device you could install in your PC that’s more visually striking--especially in that price range. If you’re considering this new model over the old one (which is still readily available), we’d consider the price difference of the new model worth it for the ability to turn it off via the controller box alone--especially if, like us, your board lacks a 5V ARGB header for control via motherboard RGB software.