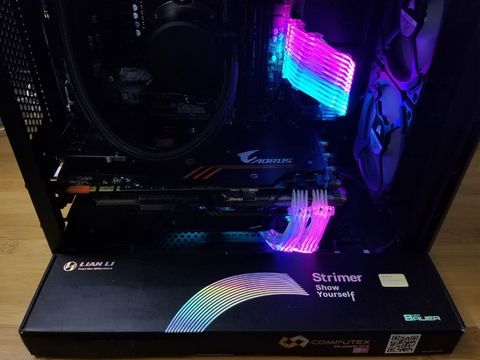 If you have a compatible 5V RGB header and are looking to add a splash of color your high-end graphics card’s PCIe power cables, the Strimer 8 Pin is easy to recommend. But it’s best suited to those who already own the 24-pin Strimer, and it’s not designed for cards that don’t require two PCIe connectors.

The love-it-or-hate-it debate over RGB components and peripherals isn’t going away anytime soon. But for those who have embraced the rainbow, Lian Li’s Strimer -- effectively a 24-pin motherboard extension cable with RGB tubes on top of it -- is a unique and colorful addition to your case that, was one of the stand-out products in our recently built our RGBeast tower.

At some point late last year, Lian Li released a follow up / companion “Strimer 8 Pin” with little fanfare--I stumbled onto it accidentally on Amazon. The Strimer 8 Pin brings the same RGB light tubes to graphics card PCIe power cables as the 24-pin model brings to the primary PSU cable.

Like the original Strimer, the Strimer 8 Pin comes in two sections. The first is a pair of white sleeved PCIe power extension cables, each with a 6+2 end for plugging into your mid-to-high-end graphics card. The second section is comprised of the light tubes that clamp on top of the sleeved cables, along with a tethered proprietary power cable on the back end.

The power cable leads to some of the Strimer 8 Pin’s limitations. It either has to plug into a motherboard or aftermarket controller box with a three-pin 5V addressable RGB header, or you need to also have the original 24-pin Strimer for the Strimer 8 Pin to plug into. Unlike the 24-pin model, the 8 Pin kit doesn’t come with a controller card for controlling the lighting effects without a 5V header.

In other words, the Strimer 8 Pin is mostly designed to be a companion device for the original 24-pin model. And while the company’s product page calls out the fact that the 8 Pin lacks the lighting controller (albeit in small red text on a black background), this issue is even less clear on sites like Amazon and Newegg. So if you don’t also have the original Strimer, be sure you have the requisite RGB header before buying the 8 Pin model. Nothing’s a bigger RGB bummer than buying a component and not being able to plug in the lights.

Installing the Strimer 8 Pin requires a fair bit of setup, just like the original model. You need to physically push the sleeved extension cables onto the cable combs that are build into the light section. Lian Li includes a tool to help you do this, but a thick credit card or something similar would work about as well.

Lian Li recommends you have at least 0.6 inches of clearance, specifically. I didn’t have clearance issues installing the Strimer 8 Pin in the Corsair Crystal 280X or the Thermaltake Level 20 GT. But both of these chases are very wide, with lots of cable-stowing space.

Also, note that the Srimer 8 Pin is designed for use with graphics cards that require two supplemental power connectors. The standard 6+2 plug layout means it doesn’t matter whether the plugs are six-pin, eight-pin, or a combination of the two.

But the Strimer’s light tubes are all tethered together to a black piece of plastic and electroncs that clips onto the back of both of the extension cables. There’s really no way to install the lights on a single power cable. So don’t expect to install the Strimer with your Nvidia RTX 2060 Fouders Edition or some less-power-hungry card.

In some sense, the Strimer 8 Pin is a fairly good value--if you can find it for under $30/£40 as I did on Amazon (it’s currently out of stock there at the time of this writing). Because a pair of foot-long sleeved PCIe extension cables alone will run you about $20/£30. It’s hard to argue against adding lights to that package for an extra $6-8 or so. But that of course assumes you were already looking for sleeved graphics card cables (which is how I stumbled on this model of the Strimer in the first place).

But priced close to $40 as it is in some online stores, the 8 Pin Strimer is tougher to argue for--especially since it doesn’t include the controller card, which many users will need who don’t have a 5V RGB header or the original 24-pin Strimer to plug this model into.

Whether or not adding this Strimer to an existing setup that already has a rainbow-emitting 24-pin Strimer might be “RGB overload” is of course a matter of taste. But if you’re looking to add a splash of color and to hide your existing ugly un-sleeved PCIe cables (as I was), the Stimer 8 Pin is certainly worth considering.