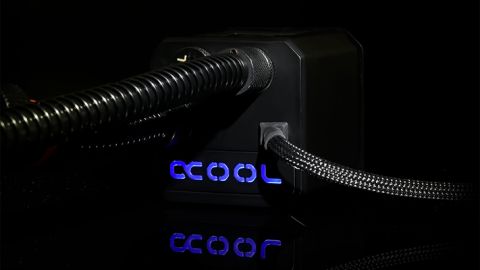 With more flow capacity, a larger radiator, and a leak-free quick coupling, the Eisbaer 360 CPU appears better-suited to fitting additional components than the value-awarded Celsius S24. It also costs around 50% more, putting it at odds with Swiftech and EK units that have even-better-rated pumps. Informed buyers should choose between Alphacool’s big radiator or its competitor’s larger pumps based upon the requirements of other components they may wish to add later.

Alphacool joined the liquid cooling party a few years ago, but it wasn’t until last year that we started to see complete, factory-filled loops from the company. Filled systems allow neophytes to build without worries of leaks or purging, and then add components later as they become more comfortable mixing water and electricity <wink>. Alphacool’s filled kits go a step further towards inspiring that confidence by including a leak free, quick-coupling that lets you add a component without draining the loop. Designed for three 120mm fans side-by-side, Eisbaer 360 is the company's largest model to date.

The “DC-LT 2600 Ultra low noise ceramic” pump is built atop a CPU water block, in a configuration I typically call a “head unit.” Speaking of that, the pressure of this 70LPH pump is only rated at 0.85m head, which means it probably won’t work all that well with restrictive accessory blocks. Alphacool’s own Eisblocks are likely designed to maintain proper flow rate at that relatively low pressure.

Proof of Alphacool’s leak-free coupling can be seen by simply unscrewing its collar. Even though the system is completely filled, only the tiniest droplets of coolant are exposed.

Mounting brackets snap together inside a groove surrounding the head unit, near its base. Three different sets of screws are designed to fit the factory socket support plate of most AMD motherboards, the LGA 775 through 1366 support plate supplied by Alphacool, or the integrated support plate of LGA 2011/2066. Simply insert each of the four screws selected for your socket through an included spring, washer, and bracket hole before adding nuts to hold the pieces together. Alphacool now includes another set of spacers for AM4 boards that have flush support plates.

You can see in the image above that the head unit’s contact surface is nearly perfectly polished with minimal waviness, and gold plated to prevent oxidation. A protective plastic sticker that prevents scratches during shipping has been removed for that photo, and must be removed prior to installation to assure proper contact with the CPU’s heat spreader.

Since our LGA 2011-v3 platform has an integrated support plate, the head unit simply screws in place after adding thermal paste. We screwed the Eisbaer’s fans to the bottom of the radiator before screwing the radiator to the top of our case.

Next Page Comparison Hardware, Evaluation & Conclusion
4 Comments Comment from the forums
Be In the Know