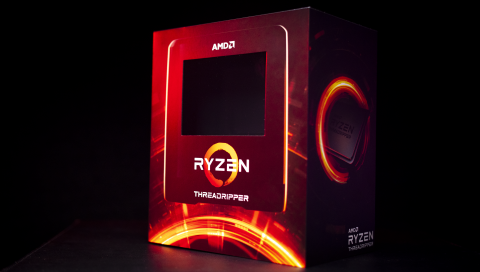 Given the impressively high boost clock specifications for these core-heavy chips, and AMD's continuing optimization of its boost implementation, we ran a few tests to measure the chip's ability to hit its rated speeds.

Generally, stock coolers that worked with the previous-gen Threadripper models should suffice for most users, but beefier coolers can unlock more performance. AMD ships all Threadripper CPUs with an Asetek bracket that provides partial coverage of the massive heat spreader using supported closed-loop liquid coolers. According to AMD, this partial coverage is fine for stock operation, but we prefer full-coverage coolers. We tapped the Enermax Liqtech 360 TR4 II for cooling the processor at stock settings. AMD also collaborated with Cooler Master to develop the Wraith Ripper heat sink/fan combo for its Socket sTR4 interface. It's sold separately, though. We also used a beefy custom watercooling loop with two 360mm radiators for overclocking testing.

You'll need to install AMD's chipset drivers to enable the UEFI CPPC2 interface, which allows the operating system to prioritize scheduling threads into the fastest cores of the processor first. The chipset drivers also automatically install the required AMD-designed power plans. You'll also need the Windows May 2019 Update (or later) to enable the topology-aware scheduling implementation. Also, be aware that silicon quality, your motherboard, and firmware all play a role in the efficacy of AMD's unique boosting implementation, so your results may vary.

With those prerequisites in place, we turned to our now-standard test that we've used in our series of Ryzen 3000 boost clock tests. We begin by recording the frequencies of each core during a series of commonly-used tests that should expose the peak frequencies. The first two tests are LAME and Cinebench in single-core test mode. These programs only execute on one core of the processor, which typically allows the chip to reach its peak boost frequency within its power, current, and thermal envelope. We also used tests with intermittent "bursty" workloads: PCMark 10, Geekbench, and VRMark run in rapid succession after the first two tests.

With 32 cores hammering away, the per-core frequency recordings create unintelligible charts, so the album above only includes the maximum and minimum frequencies recorded during each 1-second measurement interval (100ms sampling). That means these measurements could come from any one core, but it makes the charts easier to digest. We've also plotted chip temperature on the right axis (the dark red line).

At stock settings with the AIO cooler, we reached 4.55 GHz frequently. You'll notice these boost frequencies are short in duration, while Intel's processors tend to reach their boost clock and stay there for longer periods of time (contingent upon BIOS settings). We engaged the auto-overclocking PBO feature with the Enermax AIO and recorded 4.575 GHz sporadically and received slightly more frequent boosts, but this varies on a run-to-run basis.

Finally, we topped the processor with the custom loop and measured frequencies with PBO engaged. We recorded a few maximum boosts of 4.650 GHz, but we also recorded frequent boosts of 4.6 GHz across several test runs. Overall this is the most promising boost behavior we've seen with the Zen 2-based processors, and it appears that AMD's long-touted but never-realized promise of potential boosts beyond the rated peak frequency through its PBO algorithms may be realized, at least with our chip. We've flagged this for further investigation.

We also examined the logging output and noticed that the boost activity frequently occurred in active cores. That's an improvement over past Ryzen firmwares that incorrectly boosted inactive cores, and signals that the improvements we've already seen on the X570 platform carry over to TRX40.

AMD's Ryzen 3000 processors have drastically improved single-threaded performance, but you'll lose that benefit if you manually overclock. That's because the 7nm chips can't be manually overclocked on all cores to reach the same frequency as the single-core boost frequency. In fact, the all-core overclock ceiling is often 200 to 300 MHz lower than the single-core boost speeds, which is likely due to AMD’s new binning strategy that finds the Ryzen 3000 chips with a mix of both faster and slower cores.

Given the already-prodigious power draw of these 280W TDP chips, temperatures are a concern for manual overclocking, though the solder thermal interface material (sTIM) between the heatspreader and dies does help thermal dissipation. Brute-force manual overclocking may not be the best path forward with conventional cooling, but newer BIOS revisions that support per-CCX overclocking have surfaced, which opens up a new pathway for more fine-grained optimizations.

We turned to AMD's auto-overclocking Precision Boost Overdrive feature for our battery of tests. This auto-overclocking algorithm preserves the benefits of the single core boost, as seen in our boost testing above, while speeding up threaded workloads. We paired our PBO-enabled configurations with our custom watercooling loop and a Phanteks full-coverage Glacier C399A TR4 wateblock, enabling the utmost performance possible with our available cooling solutions. As with all Zen 2-based chips, PBO performance will vary based upon your cooling solution, motherboard, and firmware.

As we expect from processors with such high core counts, peak power measurements for the Threadripper 3000 processors outweigh all but the overclocked processors, but we do notice a substantial power reduction compared to the previous-gen Threadripper models. Given the level of performance, these power consumption figures are more than acceptable, and a quick look at the HandBrake efficiency metrics, which quantify the number of renders you can accomplish (given our workload) per day per watt of power consumed, reveals the processors offer a competitive efficiency profile.

Meanwhile, the Core i9-10980XE is also very power efficient, notching impressive gains over the previous-gen Core i9-9980XE. The Threadripper processors are competitive, which is surprising given that they consist of four 7nm compute die and one 12nm I/O die, while the 10980XE uses a single monolithic die. AMD ties these five die together with the Infinity Fabric, but has obviously tuned the fabric to be incredibly power efficient. Notably, the Ryzen 9 3950X takes the crown as the most efficient processor in our test pool.