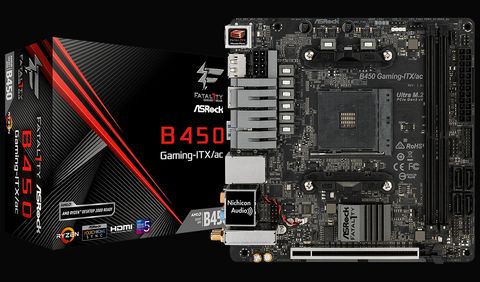 Manual overclocking via F-Stream’s OC Tweaker menu worked, but CPU multiplier is its only clock control. A useful system information page and fan tuning algorithm are also present, though fan tuning can be done just as easily from firmware.

ASRock Polychrome RGB finally supports our Kingston memory, at least on this board, allowing us to synchronize lighting effects between the LED strips and/or RGB CPU cooler and the DRAM.

B450 Gaming-ITX/ac firmware has no “EZ Mode” GUI, but its classic interface opens by default to the “Main” menu and can be configured to open to any of the other menus listed as tabs near the top of the screen. We started our overclocking effort using “ASRock Setting” and reached a CPU frequency of approximately 4,275MHz at a mere 1.344V, which is the full-load voltage we found after setting 1.40V on a board that does not have a CPU Loadline Calibration adjustment.

As with other ASRock AM4 motherboards, we had to enable an XMP profile to enable the DRAM timing menu in “ASRock Setting” mode. Voltage is only adjustable in 50mV increments, and the 1.30V setting produced 1.319V when measured at DIMM slots. The 1.363V we measured at the 1.350V setting violates our test standards, which are tightly capped at <1.355V to assure fair overclocking comparison.

The “DRAM Information” menu item opens a sub-menu that shows useful programming information as read from each module.

The DRAM Timing Configuration sub-menu includes primary and secondary timings and a few other useful settings.

Switching from “ASRock Setting” to “AMD CBS Setting” in the OC Tweaker menu enables CBS settings under the "Advanced" menu. The above settings represent the same CAS 21 timings we used for overclocking under “ASRock Setting” mode, but access in this manner didn’t require us to base our overclock on XMP timings. Unfortunately, we were still stuck with the same DDR4-3600 limit.

Fan settings at the bottom of the "H/W Monitor" menu include PWM and voltage modes for all three headers, automatic profiles, manual configuration and a “FanTuning” algorithm. The “Fan-Tastic Tuning” menu allows users to make manual adjustments using a visual graph rather than a table.