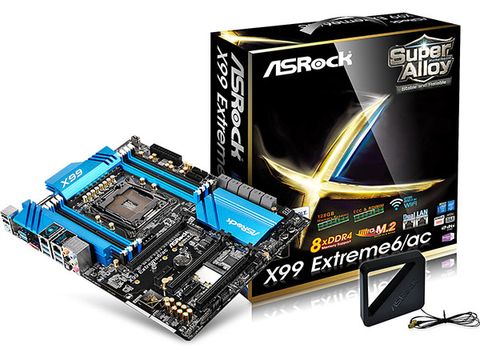 Similar in many ways to the Asus X99 Pro, ASRock’s $15-cheaper X99 Extreme6/ac appears to be worth exactly $15 less than that competing product.

More PCI Express connectivity is one of the most prominent reasons to buy an LGA 2011-v3-based platform. Lots of CPU cores are important to certain power users as well, but those PCIe lanes and the four-channel memory controller are why the processor interface is so much larger than Intel's mainstream LGA 1150.

This is a motherboard review after all, and it’s easy for those of us who need extra pathways to see that 40 lanes of PCIe 3.0 are twice as many as 20. Intel even says that 2011-v3’s lanes can be divided across five slots, compared to LGA 1150’s three.

But the tech specs get more complicated after that, and the struggle against those complications are where we often see great ideas fall apart. The first problem is that Intel reserves the 40-lane PCIe 3.0 controller for its top two Core i7 models (currently, the -5960X and -5930K). Lower models like the -5820K get a 28-lane controller. Yet, even with only 28 lanes, we should be able to get three-way SLI at x8-x8-x8 and have four lanes leftover for a PCIe 3.0 x4 SSD, right?

In unfortunate mimicry of its closest competitor, ASRock doesn’t split the first slot into x8 mode, even when the lanes are needed elsewhere. Perhaps this is a marketing decision. Or perhaps the engineers just wanted to save a few dollars in PCIe pathway switches. At any rate, the X99 Extreme6/ac bears the same three-way SLI caveats as the recently-reviewed Asus X99 Pro. The Core i7-5820K processor breaks three-way SLI capability, and a PCIe-based M.2 drive disables that slot entirely. The good news for those whose hardware choices are unaffected is that—unlike its long-divorced partner—ASRock didn’t screw up the X99 Extreme6/ac’s PCIe 2.0 slots.

ASRock’s always tried to offer its customers a few more features for a little less money, so let’s see what other advantages the X99 Extreme6/ac holds…