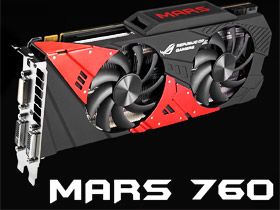 Every single day, your favorite vendors send in requests to have their products reviewed by Tom's Hardware. We typically try to maximize the number of components presented to you, our readers, by organizing round-ups. There's a lot more to be learned, we think, by comparing the strengths and weaknesses of many competing offerings. But occasionally, a unique specimen surfaces so unlike everything else that we devote an entire story to it. Today we're looking at Asus' Mars 760, a graphics card with no peer. To test it, we have to reach into our collection of cards for relevant data points.

This isn't the first board in Asus' Mars family, and if you're familiar with the brand, then you already know the ROG MARS760-4GD5 boasts two Nvidia GPUs (Asus reserves the Ares brand for its dual-Radeon creations). All semblance of suspense is relieved by the model number: 760 gives away the fact that we're looking at a couple of GK104 processors. And incidentally, they're overclocked, too.

Asus' packaging claims that the Mars 760 is about 7% faster than a GeForce GTX Titan, though at its $650 price point, it's really competing against the Radeon R9 290X and GeForce GTX 780 Ti. I didn't have a 780 Ti on-hand, so I'm tuning my Titan to approximate the more gaming-oriented card's performance.

Plugged in and powered up, the word Mars slowly "breathes" thanks to red LEDs behind the name plate.

There is one SLI connector; Asus says it worked closely with Nvidia to enable four-way operation with a second card (since GeForce GTX 760s typically don't scale to four-way configurations).

Also, you'll need two eight-pin auxiliary power connectors. Nvidia cites a 170 W graphics card power figure for one GeForce GTX 760. Meanwhile, Asus says its card should fall closer to 300 W, with spikes higher if you run more taxing apps like FurMark. A PCIe slot is rated for up to 75 W; an eight-pin lead should be good for up to 150 W; a six-pin connector officially serves up 75 W as well. Although we've seen plenty of cards pull more power than their inputs were officially rated for, it's pretty clear why Asus felt two eight-pin connectors were necessary in this case.

A side view gives you a peek into Asus' DirectCU II cooler, which employs eight copper heat pipes (four per GPU). Two low-profile 85 mm fans blow through the sink's fins to keep the GPUs running efficiently. The company claims these are dust-proof, but we'll believe that after a year or two of real-world use.

Hidden under the cooler is a 12-phase VRM, which may play a role in overclocking. This will get tested later in today's story.

As part of its marketing message, Asus says the Mars 760 only uses Japanese Nichicon GT-series capacitors and other high-quality components like super alloy power chokes, MOFSETS, and POSCAPs.

The Mars 760 is equipped with two dual-link DVI-I, one dual-link DVI-D, and one mini-DisplayPort output. HDMI is also covered by a bundled adapter.