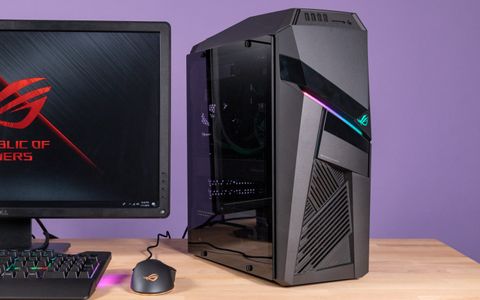 You’ll pay a lot for the Asus ROG Strix GL12CX, but this desktop is a powerhouse gaming rig that shows games at their very best. Bonuses come in the form of a bounty of front panel port options and top-grade included peripherals.

The Strix GL12CX shares looks with its predecessor, the Asus ROG Strix GL12CM that we reviewed earlier this year. That means you get a dark gray, aggressively angular design and lots of RGB. The very front of the case has a bunch of stripes and angles and a magnetic front plate that pops off to reveal a neat trick: a hot-swappable SSD bay (there’s also an optical drive, but that’s far less innovative). Additionally, there’s a glowing ROG logo and an RGB stripe cutting across the front, which can be changed with Asus’ software.

Both sides are the same dark gray color, but the desktop comes with a transparent plastic panel for showing off your PC’s innards. It requires putting in some riser screws that allow for airflow before using hand screws to secure the panel. Note, there’s a small slogan on the clear panel: “Concealed in darkness, lethal in battle.” That comes off as goofy to me, even for a desktop with this aggressive design.

I can’t help but appreciate how many ports are easily accessible on the front of the GL12CX: two USB 3.1 Gen 1 (Type-A) ports, a pair of USB 2.0 ports, an SD card reader and a headphone jack are all available without reaching behind your machine.

Of course, there’s plenty more on the back, including pairs of USB 2.0 and USB 3.1 Gen 1 (Type-A), as well as four USB 3.1 Gen 2 (Type-A) ports. Additionally, there’s an Ethernet jack, and one port each for S/PDIF out, mic in, line out and subwoofer. All of the video ports are on the GPU: two DisplayPorts, an HDMI output and VirtualLink for VR headsets.

Removing each side panel requires taking out two Philips head screws, as opposed to the easier thumb screws of many competing systems. The GPU is held in with a crossbar for support, but if you want to upgrade (I suppose when the RTX 3080 comes out?), that’s simple to do. The two sticks of RAM are immediately accessible, as is a DIMM.2 drive, which plugs into an extra slot next to the RAM. It fits two M.2 SSDs, though ours had just one 512GB SSD in it.

The 5.25-inch bay for the 1TB, 7,200-rpm HDD is in the back. Accessing it requires taking off the left side panel. The cable management is pretty intense back there, and the HDD is surrounded by cords. You could remove a few cable ties to get to it, but you may have a mess putting the whole thing back together.

On the bright side, there is the hot-swappable SSD bay. Simply take a magnetic cover off the front of the desktop and pull out the tray to upgrade your SSD.

The Shadow of the Tomb Raider benchmark on the highest presets is tougher. The GL12CX ran the game at 77 fps at 1080p, while the Trident reached 89 fps. At 4K, the GL12CX fell under the 30-fps playability threshold at 27 fps, but the Trident just made it.

On the SteamVR performance test, both desktops reached a perfect 11, making it Oculus Rift or HTC Vive ready.

To stress test the machine, we ran our Metro: Last Last benchmark 10 times on a loop. The average frame rate was 92.9 fps. There was some definite variance, with runs skipping between 85 fps and 95.8 fps before stabilizing between 92 and 94 fps. The CPU ran at an average of 4.4GHz and 53.1 degrees Celsius (127.6 degrees Fahrenheit). The GPU’s average temperature was 73.8 degrees Celsius (164.8 degrees Fahrenheit).

It took 24 seconds for the GL12CX to pair 65,000 names and addresses in our Excel macro test, coming out a second ahead of the Trident and far ahead of the average.

On our Handbrake test, in which we use the program to transcode a 4K video to 1080p, it took the GL12CX 5 minutes and 1 second to complete the task. That’s 37 seconds faster than the Trident X and the average of 6:43.

These are the best pack-in peripherals I’ve seen on a gaming desktop. That may be because these aren’t just cheap add-ons, but an actual mouse and keyboard that Asus sells separately.

The mouse, the ROG Gladius II Origin, is a wired FPS gaming mouse with a 12,000-DPI optical sensor and Omron switches that should last for up to 50 million clicks. The rubbery grip is far more comfortable than most plastic mice tossed in with gaming notebooks.

The keyboard, the ROG Strix Flare, has Cherry MX red switches and media controls aligned to the left so that they are closer to your hand on the WASD keys. There’s also a USB passthrough, and a wrist rest, while plastic, is still welcome.

Both of the peripherals are compatible with Asus’ Aura Sync RGB lighting platform, and you can synchronize them with the desktop in whatever patterns or colors you choose.

Asus actually took it easy on the pre-installed software with the GL12CX.

That’s partially because it bundled in a bunch of features into one new app: Armoury Crate (yes, with a “u” in proper, British English). It serves as a hub that shows your CPU and GPU loads, memory and storage and fan speeds along with different usage modes that adjust the overclocking.The app also lets you stop select processes while you’re playing games. It’s also the new home for Aura Sync, so you can use it to select RGB colors and choose which devices should be synchronized. Like Asus’ old software, it can be used to launch other Asus apps, like Sonic Studio 3 and Sonic Radar for audio, XSplit Gamecaster for streaming and Game First to adjust which programs get network priority.

Still, Asus has some junk on there, including a McAfee Security trial, Asus Five-in-a-Row and setup apps for both Asus’ Windows Mixed Reality Headset and the Oculus Rift. And that’s on top of all of the questionable extras packed into every Windows 10 installation.

Asus sells the ROG GL12CX with a one-year warranty.

Asus can call the ROG Strix GL12CX what it wants, but this is no esports machine. It’s way too powerful and expensive for that. It’s a powerhouse gaming rig designed to show games at their very best. It does have some esports benefits, like great peripherals, a lot of accessible ports and a hot-swappable SSD bay. But for nearly $4,000 (as our review unit was configured), we expected more.

But if you’re in on Asus’ lighting ecosystem or want great peripherals packed in the box, the GL12CX is worth looking at. You’ll just pay a lot for it.