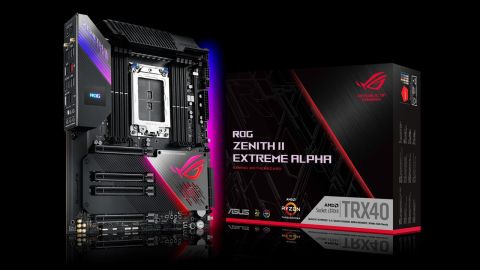 With the best overclocking features in its price class, the ROG Zenith II Extreme Alpha earns our vote for Threadripper-based extreme performance builds.

Asus’ original Zenith II Extreme seemed like one of the best TRX40 models when we tested it, but it was tough to justify its price. And now that we’ve tested the only other $850 TRX40 motherboard on the market (Gigabyte's TRX40 Aorus Xtreme), we might be ready to finally make our decision. Asus sent a new board just in time to take a second bite of the apple.

We pored over the specs to see if anything changed, and even asked Asus PR, only to be given a vague description of the Zenith II Extreme Alpha being better-optimized for extreme overclocking. We looked for even the slightest alteration, and finally came across a tiny update: While the original Zenith II Extreme had sixteen 70A MOSFETs, the new one is fitted with Infineon TDA21490 90A parts.

Flipping the board, we found that the improved MOSFETs are driven by the same ASP1405I controller, which appears to be a rebranded Infineon IR35201. We can also see the shine of where the rear cover’s thermal pad contacts the board, directly beneath its CPU core power transistors.

Audio is provided from two onboard USB adapters using Asus’s version of the ALC1220 codec and an ESS9018Q2C DAC.

Like the audio and I/O controllers, every connector on the Zenith II Extreme Alpha appears to be carried over from its predecessor, from the USB BIOS Flashback and CLR_CMOS buttons as well asthe USB Type-C and Type-C 2.2 ports on the I/O panel, to the collection of advanced buttons and switches in the forward bottom corner described in our earlier review. Even the Live Dash OLED panel above the I/O ports, and the x16/x8/x16/x8 PCIe slot spacing that favors two triple-slot graphics cards, remain.

If you want to add M.2 drives to the Zenith II Extreme, you need to remove a large cover for both slots. It’s not connected to the fan shroud, however, so you can leave it off if your drives have their own heatsinks.

Changes beyond the upgraded voltage regulator components weren’t found on the board, but within its installation kit. While we didn’t find the Asus-branded screwdriver in the Alpha kit, the Zenith II Extreme’s DIMM.2 two-drive M.2 riser card, six-port Fan Extender card, and USB flash drive loaded with drivers and applications remain.

Next Page Software, Firmware and Overclocking
No comments yet Comment from the forums
Be In the Know