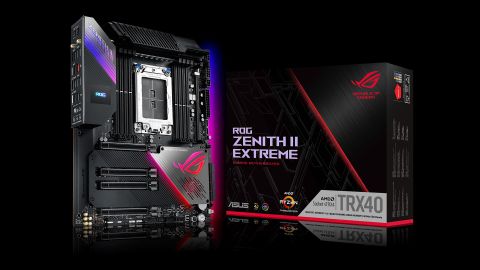 While the manual settings of Dual Intelligent Processors 5 worked, its auto-tuning algorithm didn’t provide a useful overclock, and we’ll get into that more in our firmware description. We were also surprised to learn that Asus Aura Sync didn’t work with our motherboard’s lighting, though it did address the board’s ARGB and RGB headers, as well as our G.Skill RGB memory.

ROG Zenith II Extreme firmware defaults to its Advanced Mode interface, where its Ai Tweaker menu allows full manual tuning of both the CPU and memory. Users who want to start their overclocks with an XMP profile must switch to D.O.C.P. mode at the top of the menu before proceeding. Though the board used our XMP's 1.35V setting, we used our meter to determine that its 1.330V DIMM setting produced 1.352V on one bank and 1.354V on the other.

In addition to functional manual overclocks, the above settings include three “Performance Enhancer” and two “T.P.U.” automatic overclocking  levels, most of which were nearly useless for our CPU. The first two “Performance Enhancer” settings produced such high CPU core voltage that our CPU throttled almost instantly under load. "TPU I" provided a 38X multiplier for all cores at only 1.05V, and TPU II pushed it just a hair higher to 3.9 GHz 1.08V. That last setting is actually…not too bad.

The ROG Zenith II Extreme’s DRAM Timing menu offers full control of primary and secondary timings, along with a few more-advanced items for serious tuners to play with.

We set the maximum values for current (amperage) limits, as well as raising temperature throttle points, to find the highest stable frequency for our CPU.  The External Digi+ Power Control “Load-line Calibration” setting of Level 6 was as high as we could go under Prime95 small-FFTs without causing throttling or shutting down.

In additional to the board’s fan tuning algorithm, users are invited to set their own fan profiles via the Asus Q-Fan Configuration submenus accessible at the bottom of the hardware monitor menu.  All four-pin fan headers are three-pin compatible and can be switched between voltage and PWM-based control. Leaving these to automatic mode allows the board to make its choice based on detection of the fourth (PWM) wire.

Pressing the “F6” key on your keyboard brings up a graphed version of Asus Q-Fan control.

Pressing “F7” on your keyboard switches firmware to its EZ Mode GUI, where users can still enable XMP compability (via the D.O.C.P. option), select a fan profile, chose boot order, or even switch EZ System Tuning from “Normal” to “Asus Optimal”. The later setting got us the same overclock as the TPU 1 settings of Advanced mode, but without making us wait for a stability test during reboot.

None of our previously-reviewed TRX40 motherboards were priced close to the ROG Zenith II Extreme, so we just threw everything we had at it using a GeForce RTX 2070 Gaming OC 8G, Toshiba OCZ RD400 and G.Skill’s Trident-Z DDR4-3600 to feed AM’s Ryzen Threadripper 3970X. Alphacool’s Eisbecher D5 pump/reservoir and NexXxoS UT60 X-flow radiator cool the CPU through Swiftech’s SKF TR4 Heirloom.

Despite all of Asus’s effort to equip the ROG Zenith II Extreme for extreme overclocking, its maximum stable CPU clock falls dead center between our previous boards when using the moderate voltage levels we needed to keep our sample cool. It’s a monster DRAM overclocker though, initially pushing our DDR4-3600 well past DDR4-4266 before an extended stability test forced us to rein it in at that previous record high.

Performance is the point of overclocking though, and we see that only the TRX40 Aorus Master was able to gain noticeably from its high data rate. Our next page will show that for Asus and ASRock, memory bandwidth drops when going from our memory’s XMP to each board’s maximum overclocked data rates.