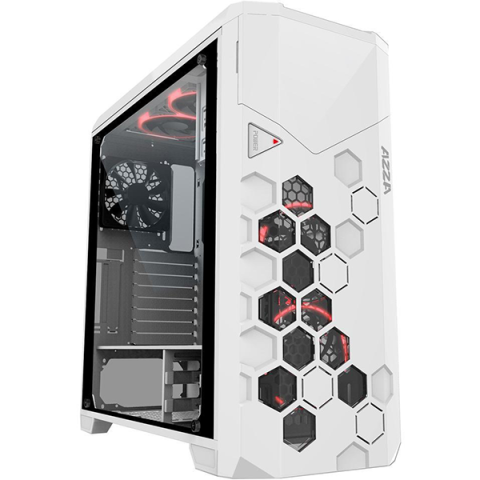 As much as I love the look of the Storm 6000, limited airflow and risky side panel installation/removal prevent me from recommending it to anyone else.

What makes a gaming case? Is it just a collection of features, such as support for long graphics cards? Does it need eight slots, so it can support an extra graphics card in the motherboard’s bottom slot? Would it need to be wide enough to support a high-end CPU cooler? Most cases designed for enthusiast markets are either game-themed or designed for extra-large components such as dual or triple fan radiators, and we always appreciate the extra slot whether it’s a second slot in an ITX cube or an eighth slot in a mid tower.

Azza lists its Storm 6000 as an ATX full tower in an age where the term “Full Tower” is loosely defined, since we no longer have secondary PS/2 power supply mounts or 3-4 drive racks above or below our boards. One reader suggested a full tower should have ten slots, even though most of the cases that defined the original label didn’t. Functional equivalence is no longer a matter of overall height with certain“gaming full towers” being built up from legacy mid-tower chassis by adding things like handles and extended feet.

I favor the term for cases that support at least an XL-ATX motherboard (up to 13.4" x10.6") and thick top-panel liquid cooling configurations (up to 3.2"). The Storm 6000 almost gets there, fitting an 18.5”-tall (mid-tower) chassis within its 21.3” height, and using an inch of the added space within its extended plastic top cover to hold fans.

A lightly tinted side window shows off the color-matched interior, while a spattering of dark-tinted hexagonal plastic windows gives users a view of the Storm 6000’s RGB fans. Users who would like to show off their cabling skills will be pleased to see a tray separating the board space from the power supply bay rather than a shroud, and those who would like to place their SSDs on that tray will find slots and screw holes upon which the case’s two 2.5” trays can be re-positioned.

Two USB 3.0 and two USB 2.0 ports bound the headphone and microphone jacks, which all point forward to reduce the collection of dust. A door beneath those connections hides a single 5.25” bay cover and an integrated RGB controller. All RGB devices feature four-pin inputs and outputs, so that they may be daisy-chained together and connected to a motherboard’s RGB controller.

Around back are eight slot covers in a row, a dual-pattern 120/140mm fan mount with slotted screw holes and factory-fitted 120mm exhaust fan, and two sideways expansion slots reminiscent of those on Thermaltake’s View 71 TG. Two screws allow the interior tray to be removed, but a stepped design on the motherboard tray prevents the installation of boards more than 12.9” top-to-bottom.

A mesh filter slides in from the back of the case to cover an extended power supply inlet. This is the only dust filter found on the Storm 6000.

Inside the Storm 6000 we find two RGB fans, additional screw slots for two 140mm fans, and two small problems for users who want to add a third fan. Slots for the third fan's top screws are located on a twist-out bay cover, and the removable bay enclosure behind it is designed for two drives. Adding a third 120mm fan requires the removal of the entire bay enclosure, preventing installation of the single 5.25” external drive supported on the front panel. Users who don’t mind holding up their radiator by just two fans could even mount a 3x 140mm radiator, though Azza only claims support for 3x 120mm radiators due to the lack of additional screw holes.

The front of the power supply bay includes a dual-tray drive cage, and each tray supports both 3.5” and 2.5” drives. The drive cage and power supply compartment divider can be removed together as a unit, though that probably won’t be necessary since there’s room between it and the front fans for radiators up to 2” thick. The 2.5” tray seen behind the top fan can be moved to one of two mounting locations on the compartment divider.

A second 2.5” drive tray, plus two 3.5” trays with 2.5” secondary holes, are found within the 0.8”-deep cable recess behind the motherboard tray. An inward step near the power supply that aligns with the compartment divider extends cable management depth to 1.2”.