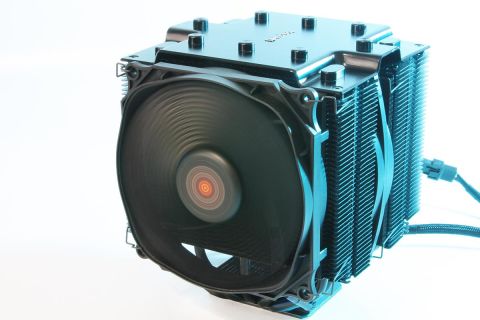 With stealthy good looks, very quiet operation and straightforward installation, the Threadripper-specific Dark Rock Pro impresses. But if you want lower temps and can tolerate a slightly higher noise level, there are better, cheaper options.

With a mounting system capable of sitting atop the massive IHS of the TR4 socket processors, the be quiet! Dark Rock Pro TR4 provides Threadripper system builders a sleek and silent option for cooling up to 32 Ryzen cores. While it doesn’t turn out the lowest Threadripper temperatures we’ve seen, it does showcase the be quiet! company’s namesake by showing some of the lowest decibel readings of large AMD TR4 coolers we have tested to date, while remaining competitively priced ($90 / £69), without excessive (and costly) lighting effects.

Considering that the Dark Rock Pro TR4 is specifically designed for AMD’s Threadripper CPUs, it’s expected that packaged contents would be focused around mounting and installation, specifically for the XL CPU socket, which is absolutely confirmed from the contents of the minimal accessory kit. be quiet! has included a syringe of thermal compound and mounting bracket hardware that utilizes the existing X399 threaded base mounts. The kit is further accompanied by a 2-way PWM splitter for the included 120mm and 135mm cooling fans, an extra set of fan brackets (in the event you wish to mount three fans in push/boost/pull setup) and a slick, magnetic screwdriver to ensure you don’t have to go fishing for the right tool when you’re trying to get your rig up and running.

be quiet! ships a pair of its Silent Wings PWM fans, a 120mm for the front push position, and a 135mm center-mounted fan, with the Dark Rock Pro TR4. Each fan rests across a rubberized vertical mount adhered to the cooling fin tower stack to silence vibrations for the sake of maximizing acoustic efficiency. Considering that be quiet! promotes their trademark dark, stealth theme rather than colorful RGB lighting, it comes as no surprise that neither the Silent Wings fans nor the cooler itself are equipped with RGB/LED decorations.

The Dark Rock Pro TR4 brings some serious aesthetic attitude (for a CPU cooler) with its aggressive fin design, black motif and brushed-aluminum top plate. Each of the seven (yes, seven) copper heatpipes pair nicely with both the cooler tower above and the integrated base below, which also houses a heatsink fin structure for additional passive thermal dispersion.

The large, rectangular base of the Dark Rock Pro TR4 covers the entirety of the Threadripper CPU’s massive CPU IHS face and is milled mirror-smooth. The heatpipes are not direct-contact and the milled base plate encloses the heatpipes within the integrated mounting base.

The included slim screwdriver comes in very handy when mounting the Dark Rock Pro TR4 over your choice of Threadripper CPU. Two of the small caps on the either side of the brushed-aluminum top plate provide access to torque down the mounting screws. Once secured, the caps simply thread back on to match rest of the stealthy décor.

Once fully mounted and with fans installed, the be quiet! Dark Rock Pro TR4 provides an imposing stance atop any X399 motherboard. Overall base height shouldn’t be much of a problem, but taller memory DIMMs (over 38.1mm)  might have some clearance issues closest to the heatsink cooling towers. Considering the Dark Rock Pro TR4 is a dedicated Threadripper cooler, installation is incredibly simple as long as you remember the threaded top-plate caps for screwdriver access, as outlined in the installation manual. And be sure to stowe the screwdriver somewhere you won’t lose it, in the event that you want to upgrade your CPU in the future.

Next Page Comparison Coolers, Testing Results and Conclusion
4 Comments Comment from the forums
Be In the Know