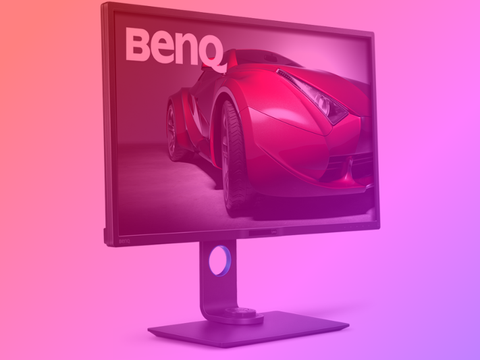 It’s hard to imagine that there’s a monitor more ready to go out-of-the-box than the BenQ PD3200U. Not only does it look great and measure well, calibration is completely unnecessary. Though not billed as a professional display, it easily competes with the most expensive monitors we’ve reviewed. If you don’t need a factory-certified calibration or a wide-gamut, almost nothing else comes close. The Philips BDM3270 is similarly accurate but only offers QHD resolution. Ultra HD has come a long way since its super expensive introduction. For less than $1000, BenQ easily hits this one out of the park.

It wasn’t long ago that early adopters were paying upwards of $3000 to be the first on the block with an Ultra HD monitor. Now it’s easy to find models for under $1000, even in the 32” size. While the high pixel densities of smaller screens are appealing, there’s nothing like having a jumbo screen sitting on your desk.

With lower prices come more choices (or is it the other way around?). BenQ has already impressed us with its value-oriented BL3201PT, which we reviewed about a year ago. More recently, it introduced a new line of designer monitors. The term refers to the intended task rather than styling. Priced below comparable professional displays, they offer a similar level of accuracy along with high build quality. We’ve already reviewed the PD2700Q, a sweet 27” IPS/QHD screen that did well in our benchmark and usability tests. Today we have the 32” UHD version in the lab. Let’s take a look at the PD3200U.

Most 32” UHD monitors cost around $1000. Some professional screens sell for more than that. The NEC PA322UHD is a notable example. That extra coin buys a wide Adobe RGB gamut and factory-certified calibration. If you’re willing to forgo those features, the PD3200U represents a great choice. It sports an sRGB gamut with native 10-bit color and an AHVA panel. There’s no factory calibration data sheet in the box, but as you’ll see shortly, it aces our accuracy tests and out-distances many professional screens after they’ve been calibrated.

Build quality is first rate, as we’ve come to expect from BenQ. In fact, only NEC offers a comparable level of ruggedness. It’s likely this monitor will become a long-term purchase—fitting, then, that it won’t demand an investment north of $3000. Additional features include a flicker-free backlight, OSD puck controller, and a comprehensive set of calibration controls; though in the case of our sample, they aren’t needed. The panel boasts wide viewing angles and a slightly-higher-than-average response time of 4ms. On paper, the PD3200U looks like a keeper.

The box is sturdy but perhaps a little shallow for such a heavy display. There’s plenty of foam protecting the panel, upright, and base, which assemble without tools. Still, we’d like to see a bit more volume in the carton to protect against rough handling.

Bundled cables include DisplayPort, HDMI, and USB. The power supply is internal and connected via an IEC cord. In a small box, you’ll find the OSD puck controller, which connects to a dedicated mini-USB port on the input panel. Supporting software and documentation are provided on a CD, or they can be downloaded from BenQ’s website.

The first adjective that comes to mind when assembling the PD3200U is “beefy.” This is one substantial monitor, and at nearly 30 pounds it requires thought when moving. BenQ has cast a handle into the solid-aluminum upright to make this easier. At the bottom of said upright is a small nest for the OSD puck. Its cord is long enough that you can put it anywhere on your desk within about 18” of the screen. It has buttons for OSD navigation plus three user-programmable keys.

The panel doesn’t make any effort to be slim with a fairly wide (by today’s standards) .5" bezel around the top and sides and a wider .8” across the bottom. In the center is a proximity sensor that can turn the monitor off when you leave your desk and control the backlight level. Those features are disabled by default. At the lower-right are backlit touch-sensitive controls for the OSD. They respond perfectly, requiring neither too much nor too little pressure.

The anti-glare layer is typical of desktop monitors with a 3H hardness rating and a matte finish that prevents reflections from harming image quality. We didn’t see any evidence of graininess or loss of clarity. The high pixel density is well utilized.

The solid aluminum upright supports a full range of movements including 45° swivel, 5” height, and 25° tilt. You also get an impressive portrait mode. We can imagine the ease of editing orchestral scores or working on poster-sized graphics when the panel is rotated.

The PD3200U looks a bit chunky from the side but that only adds to its rugged feel. The power bulge is flat, so making use of the 100mm VESA mount is easy for those choosing their own brackets or monitor arms.

There are three I/O panels—two on the right side and a third one on the bottom. The one on the bezel offers two USB 3.0 downstream ports along with an SD card reader and a headphone jack. The main video input group has one standard DisplayPort and one mini-connector. You also get two HDMI 2.0 ports which support HDCP 2.2 copy protection. This makes the monitor compatible with the latest Ultra HD AV sources like UHD Blu-ray players or streaming boxes. The bottom panel has two more USB 3.0 downstream connections plus two upstream jacks. You can hook up two computers to the PD3200U and switch between them in the OSD while using only a single mouse and keyboard. There's an analog audio output in the form of a 3.5mm mini-jack. The mini-USB port services the OSD puck-controller.