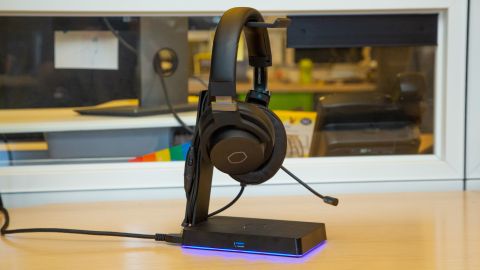 Your gaming station isn’t complete without a gaming headset. But unless you’re lucky enough to have a gaming monitor with a built-in headset stand, your headset is either tossed in a drawer, sits on your desk in a sad heap or dangles precariously off a hook clamped to your desk when not in use.

Enter the Cooler Master GS750 headset stand, available August 27, which brings RGB and USB ports to your gaming setup, 7.1 surround sound to your cans and Qi-certified wireless charging to your smartphone. But hardcore RGB addicts may be left unfulfilled, and neat freaks may hate how their phone sticks out of the charging base.

At first glance the GS750 is a simple accessory, just a base with an arm sticking out to toss your headset upon. With some headset stands being a mere clamp-on hook, there’s no need to reinvent the wheel. Still, the GS750 is more than a stand.

The stand’s neck is tough aluminum with no give when squeezed and a smooth, matte finish. Fingerprints and dust wipe off very easily. Around back is cable management, great for wired headsets, which you’ll likely be using considering the GS750’s plug-and-play surround sound.

Rubber covers the arm to prevent your headset from sliding. Even when I intentionally tried to jostle my headset here I had a hard time. There’s also a small lip for even more protection from an accidental tumble. Rest assured the GS750 is a safe home for even your priciest headset.

A thin strip of RGB lighting borders the base and glows to your settings programmed in the free Cooler Master Portal software. That light show will stay in place, thanks to the base’s rubber underside.

The base is also the wireless charging pad. It’s rough plastic with the outline of the Cooler Master logo center stage. Meanwhile, the base’s border is smoother plastic and holds all the ports. A 3.5mm headphone jack and USB 3.0 port is on one side, with a second USB 3.0 port on the other.

Around back is the jack for the power adapter, which must be plugged in to use wireless charging. The RGB lights surrounding the base automatically turn on if the power adapter is plugged in, even if the stand’s not connected to your computer. However, you won’t be able to control the lights (more on RGB lighting in the section below).

There’s also a USB 3.0 Micro B port in the back for attaching the included USB 3.0 cable and connecting the stand to your PC.

These features bring the stand closer to dock territory, scoring you more ports than you had before. But without a port for connecting a monitor, it can’t replace the docking station at my work desk.

Luckily the stand has a small footprint, taking up a little less desktop space than my dock, measuring 4 x 6.13 x 11.12 inches (WxDxH). Each GS750 comes with an AC adapter power cable, USB 3.0 Micro B to USB 3.0 cable and a quick start guide.

Let’s talk RGB. While naysayers may be unimpressed, those who appreciate the colorful things in life know that not only is RGB lighting a luxury, it’s a little rare to find in a good headset stand. The GS750 claims up to 16.7 million colors, programmable via Cooler Master’s Portal software.

Portal lets you pick three preset profiles: Color Cycle (unfortunately you can’t swipe out preset colors for your own), a static color of your choosing or Breathing, which flashes a single color. You can also turn off the lights and be boring.

For cycling modes, there’s also a toggle to control speed. I wish there were more preset modes, but at least you get a color wheel with a lot of flexibility. You can drag your cursor until hitting your desired color or enter R, G and B values before dragging and dropping your color creation into a slot in the “Custom Colors” section. You’re limited to 7 custom colors, however.

So how does the Cooler Master GS750’s light show compare to competitors? When we built our RGBeast PC, we went used a Cougar Bunker S RGB headset stand with an RGB ring around the base. But customization was limited to just a small number of modes controlled by pushing a button (that stand also lacks some of the GS750’s other features, but we’re focusing on colors for now).

Razer and Corsair have more comparable offerings with RGB lighting around their rectangular bases controllable via Synapse and iCue software, respectively. I don’t have either on hand, but videos of both the Razer and Corsair show they can display multiple colors at once, instead of one at a time, like the GS750.  So if you’re looking for the most RGB headset stand, this is actually not it. But the GS750 is about a lot more than just RGBing your headset’s resting place.

This stand has a neat trick for improving the sound quality of headsets using a 3.5mm jack. When you plug one into the stand, audio upgrades to virtual 7.1 surround sound, thanks to the stand’s audio codec and Cooler Master software.

This works through the Cooler Master GS750’s audio codec, which uses a DAC chip to convert digital audio to analog. The glory of 7.1 surround sound, the same type of audio often used in home theaters, is that it uses an eight-channel audio configuration rather than 5.1 surround sound’s six or many stereo headset’s two. Basically, it makes audio sound like it’s coming from different angles and distances. That means more immersive music and more realistic--and perhaps advantageous--gaming audio. Imagine realizing that an enemy is around a corner because you can tell that gunshots are coming from your left side. But there’s a catch.

With the Cooler Master GS750, surround sound is enabled via software and hardware in the stand, not from enhanced audio in your actual headset. “True” 7.1 surround sound headsets have more dedicated drivers for each direction and bass and, as mentioned, more channels than stereo headsets. That means these headsets deliver more premium audio and are, therefore, more expensive (the Asus Strix 7.1 can go for as much as $200). True surround sound headsets won’t work with the Cooler Master GS750 since they can’t use its 3.5mm and instead connect via USB. So the GS750’s surround sound feature is really for those looking to enhance a more budget-oriented stereo headset.

Without doing any additional tweaking, the GS750 noticeably improved the music coming out of and Cooler Master MH751 stereo headset ($60) and Razer Kraken X ($50). ABBA’s “Dancing Queen” was more muffled and even quieter with the feature disabled. With surround sound on, it immediately sounded a touch louder as well as fuller sound that was more balanced between my ears.

I also paid a visit to Los Santos to see if the virtual surround sound made me a better criminal in Grand Theft Auto V. I also used the software’s Gaming (Bass+) audio profile, but it seemingly has the same settings as the Pop Music profile. Audio quality improved, with everything from gunshots to fast driving sounding clearer with more oomph. But there wasn’t a screaming difference in where the noise was coming from, such a bus on my left side honking at me for driving the wrong direction, or me crashing into something on my right. It also wasn’t immediately easier to tell where gunshots were coming from, even after some tweaking in the software.

Speaking of tweaking, in addition to the Pop Music and Gaming audio profiles, the Portal software has a Movie one and the option to make your own.

The Surround Sound Rotation button spins the channels around the virtual head in the software, while doing the same with the audio coming out your headset. It’s a helpful way to find your ideal audio in real-time. You can drag the Surround Sound Distance sliders on the right to bring individual channels closer or further from the virtual head. It’s less intuitive than being able to move the icons manually around the circle, but it works.

In addition to letting you customize your RGB and surround sound experience, Cooler Master’s Portal software has an equalizer for further customizing your headset’s audio. The equalizer also has different profiles, but custom profiles don’t carry over from the Sound section to the 7.1 Surround Sound one.

You can charge your phone by plugging a cable into one of the GS750’s USB 3.0 ports, but if your handset supports it, you can also charge it wirelessly by placing it on the stand’s base and plugging in the power adapter. Wireless charging is based on the Qi standard, the most popular standard for wireless charging and charges Samsung Galaxy phones at 10W and Apple iPhones at 7.5W.

The power comes out of the base’s Cooler Master logo. The vendor says your phone has to be on top this or else charging efficiency may decrease, but in our usage, wireless charging often didn’t work at all if the phone wasn’t perfectly positioned. This is likely because the base uses just one charging coil, rather than two found in many other Qi wireless chargers that are less meticulous about phone placement.

The single coil led to inconsistent results across different phones. On a Galaxy S10+, it worked, but only if the case was off and I pushed it all the way back against the neck and didn’t move it. If I moved the phone just a smidge, the charging ceased. Strangely, it only charged an S9+ with a thicker case if placed diagonally, and, again, if I moved it, it lost the charge. An S9 with a rubber case worked with the case on and even horizontally if in the center, but not pushed all the way back.

With an iPhone XS Max, also protected by rubber, it worked, as long as it was pushed all the way back. We wish Cooler Master had sprung for a two-coil setup, considering you can such a charger for under $20. Cooler Master doesn’t advertise the stand for supporting Google Pixel 3, but our charged with its case on and pushed back.

If you’ve bought into the big-screen phone trend, your phone will probably stick out a little while charging, as the base is just 6.13 inches (15.6 cm) long. This a small, but noticeable issue if you prefer clean, neat lines at your setup.

But the wireless charging uses just one coil, so if your phone isn’t placed perfectly or moved, it’ll probably stop charging. Considering that a good two-coil wireless charger can be $16.99 (my colleague tosses his Galaxy in any direction on a $27 one), this doesn’t add an extreme amount of value, arguably less than $10, in fact.

You can also find a more colorful stand. The Razer Base Station Chroma ($80) and Corsair ST100 RGB ($60) can emit multiple colors at once. The former has one more USB 3.0 port, while the latter also has 7.1 virtual surround sound while being cheaper. Neither offer wireless charging or cable management though.

If you’re looking for the most RGB, the cheaper Corsair is more suitable. But if you want to upgrade the experience from your stereo headset while keeping cables tidy and charging your phone, the Cooler Master GS750 is the way to go. Just know you’re basically paying $10 more than the Corsair for a wireless charger and less mesmerizing RGB.