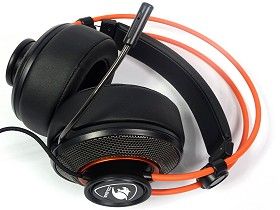 The Cougar Immersa is an inexpensive, well manufactured product with reasonable sound that matches the price. This headset is an excellent value. It doesn't necessarily excel at anything, but it gets most things right.

It's hard to believe that you can get quality and durability from a gaming headset priced in the $55 range, right? From time to time, however, we run across a test candidate that proves to be an exception. If Cougar's marketing is to be believed, the Immersa should be one such stand-out.

Sometimes cost cutting has a positive effect, and in this case, driver-free means worry-free. There is no performance-robbing or sound-modifying software to bother with. The Immersa is ready to go, right out of the box. Not needing to download, install, or register anything is a pleasant experience.

Of course, that also means Cougar's bundle is quite modest. You get the headset itself, a manual, and a simple cable splitter (from a multi-jack to two stereo jacks for microphone and headphones, respectively).

At first glance, the Immersa doesn't look cheap at all for a sub-$60 headset. However, going hands-on puts that first impression into perspective. The large ear pieces, covered with artificial leather made from polyurethane, dominate the headset's overall appearance, making it look big and bulky.

The orange-contrasted strap, the matte black cans, and the non-functional aluminum highlights made of perforated metal make us think of the SteelSeries Elite, on one hand, and Roccat's inexpensive Renga, on the other. This impression may not even be far-fetched; many pieces could, in fact, come from the same OEM.

The cable is sheathed in a fabric weave, but is still thick and rigid. Although it might seem more durable as a result, we would have liked a little more flexibility through those generous two meters of length.

The concept of a self-adjusting headband is great when it's implemented properly. This solution keeps the band flexible enough to eliminate the need for vertical adjustment of the ear pieces. The horizontal axis is taken care of by a simple joint attached to the ear piece's suspension.

This closed system's large cans are big enough to fit over any ear size and still ensure a tight seal. While this is good for blocking out the outside environment, it is bad for comfort; it generates a micro-climate of its own inside the sealed audio chamber, which starts feeling moist and sticky over time. Fortunately, the two ear pads can be removed with a slight twist, and are very easy to clean.

In the end, this 376g headset looks heavier than it feels. It's not ultra-light, but we've certainly tested headsets that were much heavier. Thus, gaming is quite comfortable. You'll just want to wipe those pads down every so often.

There is a control unit built into the cable. One side features a volume dial, while the other hosts a switch for the microphone that's sufficiently large.

The volume dial is placed inside a two-part housing and does exactly what it is supposed to do. However, in the interest of long-term durability, we'd recommend making adjustments electronically on your PC to avoid over-straining the mechanics.

A small 40mm neodymium driver is located in the body's upper part, where the manufacturer glued it in place. Tempted by the fact that the shell is so easily disassembled, we couldn't help but to peek inside.

Even though the drivers are firmly glued into place, they could be removed and replaced by better components. If you happen to have some old headphones sitting around with 50mm drivers and a damaged cable or some other broken piece, a transplant might be interesting. There'd be enough space inside, at least.

Adding some fleece or wool inside the resonating body would make it possible to lower the upper-bass range a little more. While this would certainly cut into the Immersa's maximum overall volume, it would help strengthen the deep bass and somewhat ease the typically clumsy gaming sound setup.

Audio enthusiasts looking for an even lower sound might carefully drill one or two 8mm holes through the bracket, which is clipped on at three points. This, together with the insulation, could add a little extra volume and shift the sound profile towards the lower end of the spectrum.

Naturally, experimentation like that voids the manufacturer warranty, even if the screws holding this headset together are not sealed shut. Modify at your own risk.

The omnidirectional microphone is mounted in a gooseneck arm that can easily be pushed in and pulled out, similar to older Kingston and SteelSeries models. The mic does exactly what it's supposed to do. There is no active noise-canceling, as this would be impossible to achieve without an external power supply. However, due to the capsule's design, we are able to perceive some low cut and clipping.

Sound and speech intelligibility are fine for a headset in this price range. In fact, their quality was a strength that surprised us.

It's time for a reality check. Remember, this is a $55 headset, so it shouldn't shock anyone to learn that our acoustic measurements indicate the usual bath tub curve with overemphasized bass and rather narrow highs. The target market for inexpensive gaming headsets seems to like this, though. Equalizer-imposed modifications simply aren't necessary so long as booming bass and whizzing trebles remain in high demand.

The Immersa has a bass peak at around 150 Hz. In other words, it's permanently tuned towards the upper-bass range. This is something that a certain type of customer might actually like. If high output levels are what you are looking for, this setup is in fact beneficial, since any sound lower than that requires lots of power to reach similar output levels, which the small drivers with their average performance aren't able to handle.

Installing the damping we previously discussed does, however, distill Cougar's heap of sound, revealing the acoustic precious metals trapped inside. Maybe gold isn't the best word to describe what you get, but it's certainly something for nothing.

Better tuned, it is possible to not only touch the 30 Hz boundary, but also catch a glimpse of the layers hidden below. Of course, this assumes you're actively trying to avoid what we consider to be the maddening mess of upper bass you get out of the box. On the other hand, even in its original state, the Immersa's transient response is not too bad, which comes as a nice surprise.

Next up is our subjective hearing test, which ended with more unexpected positive results for a headset in this price range, despite a collapse in the mid-range around 1.5 kHz. The low bass is there, but is quickly smeared out by everything that didn't make it up to the 250 Hz line. In games, this might be quite acceptable, especially since it reduces pressure on the eardrums and sounds louder than it actually is. For music, though, it's just a little too much. The precision we observe is merely average, and the bass is anything but crisp.

The lower mids are quite all right. There is even a warm tone to many of the instruments and vocals. The aforementioned 1.5 kHz dip does somewhat reduce accurate reproduction, but it has hardly any influence on spatial localization. Acoustic dispersion is surprisingly direct. This, of course, is also related to the device's fit, which was perfect during our test. All in all, the Immersa's resolution is quite acceptable without being really detailed. However, a low price certainly makes up for that.

The mid-range and upper mid-range, all the way to higher-pitched sounds, are reproduced in full. The sibilants sound relatively clean. And the super-high frequency band is also well defined. Up to ~14 kHz we were unable to detect any weaknesses at all.

The final hearing test leaves a positive impression. It seems as if this device at least tries to break free from the corset of its price. This is certainly not high-fidelity, but the Immersa is not a cheap gaming-only plastic boom box, either.

Compared to Roccat's Renga, the slightly higher level stability and somewhat more balanced sound are pleasing. This is a comparison between a closed system and an open one, though, and that distinction does matter a lot. In the end, you'll have to decide which you prefer.

A purchase recommendation for the Cougar Immersa is justified, mostly because of its good price/performance ratio and solid build quality. It's also easy to modify, if that's your thing. At a bare minimum, a little added damping would likely yield even better results.

In combination with its solid microphone, long cable, acceptable acoustic impression (for this price range, that is), comfortable fit, and visual appearance, we're given very little reason to complain.

Sure, at a $55 price point, certain compromises are understandably made. But for an entry-level product, the Cougar Immersa performs much better than some of the bedazzled gaming boom boxes out there. Apart from flashy looks, most of them have very little to offer audio enthusiasts.