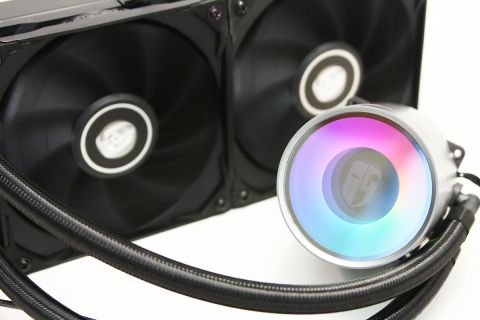 During our load testing, the DeepCool Gamer Storm 240EX generally performed a few degrees Celsius higher than notable 240 AIO coolers in both the Corsair H100i Pro and Cooler Master MasterLiquid ML240R RGB. By comparing the Gamer Storm Castle 240EX to our 240mm liquid cooling thermal leaders, we get an accurate reference point for comparison.

An interesting detail to note: The pair of better-performing AIOs of the testing group also run significantly faster fans over the 1800 RPM rated fans on the DeepCool Gamer Storm Castle 240EX.

Fan RPM often provides an indication for higher relative noise levels, but this primarily depends on fans chosen and overall radiator fin design.  Some fans are optimized more for static pressure and airflow while others are focused on remaining as quiet as possible during operation.

Evaluating thermal performance alongside registered noise levels tells us how well a cooler performs compared to its audible output. While the DeepCool Gamer Storm Castle 240EX didn’t provide the lowest thermal load temperatures, its cooling performance was relatively average, as were the noise levels.

By comparison, the Corsair H100i Pro and Cooler Master ML240R RGB each posted great thermal load values, but the noisy 120mm fans on the H100i Pro means it takes a hit on our acoustic efficiency chart, while the nearly silent 120’s on the ML240R RGB provide it an excellent comparison bump.

Taking our acoustic efficiency chart one step further, the performance value comparison includes unit pricing as a variable.  Priced at $120, the DeepCool Gamer Storm Castle 240EX holds a moderate price premium over the other three AIOs in our cooling quartet, which creates a bit of a conundrum for those seeking a great performing liquid cooler at a reasonable value. All things considered, lower load temps can be had with less-expensive cooling options.

Thermal imaging from our FLIR ONE Pro shows substantial heat soak at 50% fan speed in both the radiator and coolant tubing on the DeepCool Gamer Storm Castle 240EX. Even at 100% fan speed, there is a much defined thermal bloom in the radiator tank at the coolant entry port, indicating that the Castle 240EX might be nearing its thermal limits in our testing.

Overall, the DeepCool Gamer Storm Castle 240EX meets our expectations for a competitive 240 AIO cooler in all areas except price. With a price premium of nearly $20 over the competition, it isn't a great performance value. But if you're partial to this cooler's aesthetics, it's still well worth considering.

Sometimes, the visual appeal of a component truly compliments a hardware build, and for builders in just that position, the elegant cone-shaped, mirror-reflective, aRGB accented CPU block unit may mean DeepCool's Gamer Storm Castle 240EX is the perfect choice for your new rig.