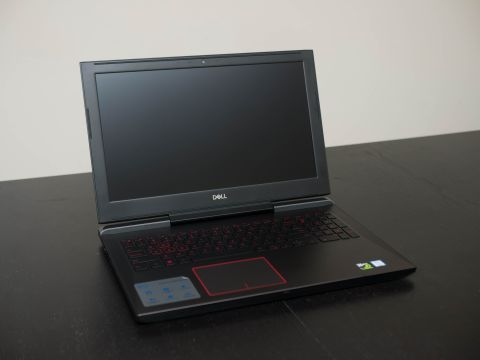 The Dell Inspiron 15 Gaming 7000 is equipped with a four-cell 56Wh battery, which is common in a laptop of this caliber; most of the laptops in this roundup land in the same ballpark. The battery capacities for the competition are as follows: The MSI Stealth Pro has a 51Wh battery, the Asus ROG Strix has a 64Wh, the Acer Helios is at 48Wh, and the Sager NP6852 has 62Wh battery.

The resulting scores are rather straightforward. The Dell’s i5-7300HQ and Max-Q GTX 1060 consume less power than an i7-7700HQ and a powerful GPU, so it outputs close to 2 hours of uninterrupted game time.

Typically, we use our Optris PI 640 infrared camera to measure the laptop’s thermals. However, the Inspiron 15’s internal structure features a large plastic shroud which obscures the cooling solution, preventing us from getting an accurate reading. For situations like these, we can use the average and maximum temperature from a GPU-Z’s thermal log. For more information about how we test, be sure to check out our Measurement Science article.

We’ve noted that the Inspiron is the thickest Max-Q laptop we’ve tested, and this allows Dell to implement a larger cooling solution. On top of that, the i5 and Max-Q GTX 1060 consume less power, thus expelling less heat. As a result, the Inspiron runs the coolest out of the laptops in our roundup, even after a grueling Furmark stress test. It reaches a maximum temperature of 60° C, underscoring the Acer Helios by a couple degrees. This is a noteworthy feat, especially considering that the Helios’s thermal performance was one of the crowning achievements earning it our Editor’s Choice award. If you live in a warm climate and thermal performance is crucial, then the Inspiron will serve you well.

We used the SpectraCal C6 Colorimeter to measure the Dell Inspiron's display. We tested it using MSI’s default sRGB True Color profile. (Check out our Display Testing Explained article for a full description of our test methodology.)

We noted in our introduction that the Inspiron features a Full HD IPS display, which is excellent for the price. A great display should aim for a contrast ratio of 1000:1, but this isn’t expected from an entry-level gaming laptop. At minimum brightness, it exhibits the lowest minimum white luminance, but this is offset by its equally low black luminance, earning it a decent contrast ratio of 867.7:1. Similarly, it has a low maximum white luminance of 233.311 and a low maximum black luminance of 0.2525, resulting in a contrast ratio of 924.1:1, which is much better than its minimum score.

The Inspiron’s RGB levels aren’t as balanced as we’d like them to be. Starting from minimum brightness, the red and green levels are slightly recessed, while the blue level is pronounced. As brightness is increased, blues continue to rise, while reds and greens fall. The resulting image has a slight blue tint.

DeltaE 2000 is a measurement of display accuracy, and it can be used to determine how accurate the grayscale measurements are. A DeltaE 2000 value of 3 or lower is ideal, as this means that the inaccuracies are not noticeable to the human eye. Grayscale is intricately tied to RGB balance, so the more unbalanced your levels, the more inaccurate the grayscale is. As such, the grayscale starts fairly accurate, but it loses accuracy as brightness is increased. The tipping point is around 50%, and values higher are noticeably inaccurate. The resulting average DeltaE 2000 is 3.622, with a maximum of close to 8 at 100% brightness.

Color accuracy is measured in DeltaE 2000, same as grayscale, so a color-accurate display will exhibit a DeltaE below 3. Unfortunately, the Inspiron’s display is less color-accurate than it is grayscale-accurate. It has a DeltaE 2000 value of 6.7103, dropping to fourth place in our roundup. Greens, blues, cyans, and magentas are particularly inaccurate across the board, and reds and yellows lose accuracy as the brightness level is increased.

It should be restated that the systems in this roundup (save for the MSI Stealth Pro) aren’t expensive laptops, and one shouldn’t expect a painstakingly accurate display from an entry-level gaming laptop. If gaming is your primary concern, then color accuracy likely isn't nearly as important.