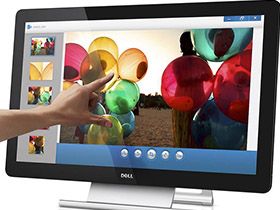 With the launch of Windows 8 in 2012, Microsoft made touchscreen computing on the desktop mainstream. The Windows 8 interface attempted to bridge the gap between phones, tablets, and PCs by providing the same multi-touch experience first marketed by Apple in the original iPhone.

While touchscreen monitors are nothing new, they never had a reason to become more prevalent until Windows 8 hit the streets. Before that, only specific commercial applications and interactive displays used the technology. While Microsoft’s shiny new OS doesn’t require a touchscreen, its default layout certainly begs for one. Most power users continue to eschew the Windows 8 UI in favor of a traditional desktop. But for the folks willing to give it a shot, multi-touch displays offer a new way to interact with your computer.

To that end, Dell recently released its P2714T. This is a 27-inch PLS screen with a maximum resolution of 1920x1080. For now, the number of multi-touch-compatible monitors at this size is small, and there are none that we know of offering higher than FHD resolution. If you want the pixel density of a QHD screen, you're out of luck at the moment.

Seven hundred dollars sounds downright expensive for a 27-inch FHD screen, regardless of its performance. But the addition of a large touch-sensitive layer is not without cost. The output position resolution is even finer than that of the LCD panel behind. This makes for an extremely precise response to user input.

The technology is the same as you’d find on an iPad. A layer of electrodes is etched onto the front glass panel. Then, current is applied to create an electrical field. When a conductive object comes in contact with the field, the change in voltage is measured and translated into an input signal.

A 10-point touchscreen adds additional gestures beyond the actions you might be most familiar with. You can use multiple fingers to pinch in and out, double- and triple-tap, flick at varying speeds, and other combinations. Each is interpreted differently and translated into on-screen motion. How that appears depends on the operating system you're using. The two most common touch-enabled OSes are iOS and Windows 8, and they both employ similar gestures.

Next Page Packaging, Physical Layout, And Accessories
24 Comments Comment from the forums
Be In the Know