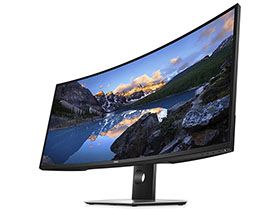 To read about our monitor tests in depth, please check out Display Testing Explained: How We Test Monitors and TVs.Brightness and Contrast testing are covered on page two.

Dell claims 350cd/m2 output for the U3818DW, but we could only coax 290.5526 from the Standard mode. It may be possible to increase the white level by raising the contrast control, but it’s already too high. We observed clipping in test patterns at its default 75% setting. This isn’t a big deal, but it means you’ll see less light when using uniformity compensation. We’ll show you its effects below.

With a black level of .3103cd/m2, contrast clocks in at an average-for-the-category 937:1. While pro monitors are almost always based on IPS parts, which deliver 1100:1 at best, AOC has ventured into new territory with the MVA panel used in the U3277PWQU. That monitor delivers excellent color accuracy and more than double the contrast of the next best screen.

Throttling the backlight to its zero setting delivers around 32nits brightness. That’s a little dim for our taste but it may work for some users; it depends on the room environment. If you want a more palatable 50cd/m2, select 14% for the brightness setting. The upside here, besides consistent contrast over the entire output range, is that the control is very fine, making it easy to set a precise white level. Each click represents no more than 2cd/m2.

To repair a red-clip issue, we had to lower the contrast slider to 67% from its 75% default setting. This results in excellent grayscale and gamma tracking but reduces sequential contrast by about 30%. Since the U3818DW is first and foremost a professional display, we prioritized color accuracy over dynamic range during our calibration. You’ll have to decide if the gain is worthwhile. In Standard mode, color is fairly accurate and contrast is higher. It will depend on your particular application. If you use this monitor in a video post-production setting, it may not easily match other screens that have higher contrast.

We’re also showing the effects of uniformity compensation, which you’ll see later in the review is unnecessary. Output is reduced by 36% and contrast by 35%. Our sample showed superb uniformity without assistance, so we don’t see a need for it.

ANSI contrast measures in lock-step with our sequential result. This indicates a high-quality panel made to a controlled standard. All the numbers we’ve seen so far are excellent except for black levels, which are higher than the other displays. Since the Acer and LG curved panels score better, we can only deduce that Dell has made a choice in the U3818DW’s design as a compromise for some other purpose.

Prev Page OSD Setup & Calibration Next Page Grayscale, Gamma & Color
25 Comments Comment from the forums
Be In the Know