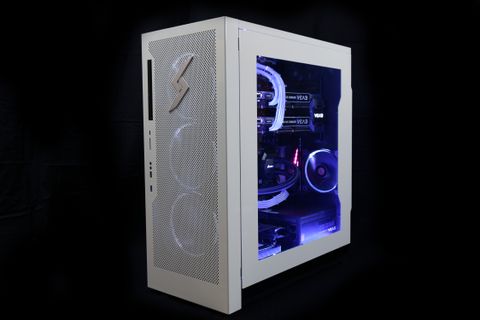 The Digital Storm Velox is a beauty of a machine, with a two-toned, custom-designed chassis bathed in RGB LED lighting, housing a hardware set that makes even the most jaded enthusiasts turn their heads. The brand new Intel Core i7-7700K and dual EVGA GTX 1080 graphics cards are overclocked to their peak attainable clock speeds, and few could deny the benefits of the performance boosts Digital Storm packs into the Velox. We can't recommend the beastly PC for its price tag, but we can say that we've come across few of its kind, and it will be difficult to upend the Velox's benchmark scores, obvious aesthetic value, and possibly its MSRP, until we see another SLI-equipped Kaby Lake system come our way.

With Intel’s Kaby Lake processors finally hitting the market, Digital Storm wanted to give us a look at one of its new Z270 gaming PCs. The Digital Storm Velox is an Intel Core i7-7700K and Nvidia GeForce GTX 1080-equipped, custom painted powerhouse with RGB LED fans and lights, and it’s not for the faint of heart or the low in cash. At $4,737, the Velox is one of the most expensive desktops we’ve had in our lab, and we’re about to find out if the performance and posturing matches the price, or if it’s all just hype and flashy lights.

The Digital Storm Velox has been redesigned, with many noticeable improvements over the previous version of the chassis, which featured an acrylic windowed panel that also had an air intake above it. However, the new custom-designed, forged-steel full tower case’s right side is all window, giving you a clear view of the interior hardware with its RGB LED lighting strip and case fans. The left side panel sports an air intake that lines up with the underside of the motherboard ILM, and the bottom of the case is elevated with a sleek black sub frame, allowing air to flow under the chassis. Furthermore, we were shocked at the system’s weight distribution; it was well balanced and made moving the device noticeably easier than some of our other recently reviewed machines, despite not having any handles and the additional GPU.

As with all right-sided window cases, the components are upside down compared to traditional (and more prevalent) cases with the components viewed from the left side. That alone makes the Velox unique, and its Apollo White custom paint job (for an added cost of $150) pushes the aesthetic even further with a sleek two-tone look. The glossy (yet not shining) finish is indicative of expert craftsmanship and care, and it stands out in a sea of common black left-sided cases.

The previous version of the Velox had a rather large front-panel I/O, but the new chassis reduced it to two USB 3.0 ports, an SD card reader, audio in/out jacks, and a USB 3.1 (Gen 1) Type-C port capable of 5 Gb/s data rates. What’s more, the slots are all hidden behind the white-painted panel, blending seamlessly into the case. The only front-panel device that stands out against the white (besides the Digital Storm emblem) is the slim-tray DVD-RW drive, but even the black optical drive looks good in the two-toned case.

The rear panel is all black, except for the I/O and GPU ports. The motherboard features four USB 3.0 ports and four USB 2.0 ports, in addition to two USB 3.1 ports (a Type-C and Type-A), both capable of data transfer speeds up to 10 Gb/s. Onboard video output options from the motherboard are limited to an HDMI 1.4 and DisplayPort 1.2 interface, but who needs those when you have two graphics cards under the hood? The GPUs each sport an HDMI 2.0 and DVI-D port, as well as three DisplayPort 1.2 interfaces, and needless to say you’ve got plenty of options for connecting multiple displays.

The side panels are thin (think poster board), light (again, poster board), and easy to remove, and they can be likened to a pair of breakaway pants (don’t inquire as to how I know that) – they come off with a simple upward tug. There are no hinges, screws, edges, or rails to line up. The case uses a unique locking mechanism to fasten the panels tight, with the main body sporting receptacles for the panels’ posts, which lock into place with a gentle tap or a little pressure once they are lined up.

Once inside, we’re greeted with an intimidating, yet easily accessible set of components that would make most enthusiasts squee tears of joy. A freshly minted Intel Core i7-7700K is overclocked to an impressive 5.0GHz using a 100MHz base clock and an all-core multiplier of 50. Curiously, most every other BIOS setting is on Auto, with the exception of the XMP memory profile and an adaptive voltage setting for the CPU that gets the chip up to speed with 1.36V of power.

We were skeptical about the stability of the company’s Stage 3 ($99) overclocking service (particularly because of the simplicity of the BIOS settings), but the processor remained rock solid during our stress tests (Prime 95 for several hours), with only occasional jumps in voltage (isolated and short spikes up to 1.39V) to stabilize the system. We’re accustomed to seeing vendors achieve extreme overclocks using static voltages, but Digital Storm’s use of the motherboard’s built-in features to attain stable clock frequencies and voltage regulation speaks to the company’s acumen with the hardware it offers.

The motherboard’s two PCIe 3.0 x16 slots from the CPU sport metal-reinforced connectors to accommodate heavy graphics cards, and that’s probably a worthwhile feature for the Velox’s GPU setup, which consists of two EVGA Geforce GTX 1080 8GB GDDR5X graphics cards in SLI (complete with an LED-lit EVGA high-bandwidth bridge). The cards feature reference (Founder’s Edition) clock rates with EVGA’s ACX 3.0 cooling, but Digital Storm included its Graphics Boost service (for $45), which purportedly overclocks the GPU to its maximum stable clock rate. For this particular GPU setup, that limit seems to be an additional 150Mhz on the core clock (giving the GPUs a 1,757MHz base clock, 1,883 boost) and 50MHz on the memory clock, with the power and temperature limits at maximum.

A 512GB Samsung 960 Pro M.2 NVMe SSD is hidden underneath the powerful graphics cards, and a 3TB 7,200 RPM Toshiba HDD gives you plenty of total storage space for just about anything a gamer could throw at it. The memory DIMM slots are all occupied with a 32GB (4 x 8GB) kit of Digital Storm’s DDR4-3000Mhz (ADATA modules) with CAS timings of 16-16-16-36, which offers speed and capacity above par for the average user.

We didn’t expect too much from the left side of the case when we removed the panel, but we were delighted to not only see neat and cleanly-run cables and more places to mount storage drives, but also a 120mm input fan for the underside of the motherboard’s ILM and two of the Thermaltake Riing controller hubs, which power a total of six Riing RGB LED case fans.

Three of the Riing RGB LED fans are 140mm and mounted behind the front panel (running vertically) as intakes; two 120mm Riing fans are positioned at the top of the case, with another towards the bottom, above the motherboard’s rear I/O panel. A Corsair H115i 280mm closed loop CPU cooler is mounted behind the front panel fans, and it sports two Corsair-branded 140mm fans on the inner side of the radiator, pulling the air into the case. An RGB LED light strip lines the bottom and left edges of the case, and it comes standard with the Velox (no additional charge).

The rig is powered by an 80+ Gold certified EVGA Supernova 850 G2, which features a single 12V rail with 70.8A of juice. The fully modular PSU makes it easy for Digital Storm to weave the cables cleanly throughout the chassis and connect to the individually-braided white cables attached to the CPU, ATX power, and GPU inputs. This aesthetic extra contributes to $69 of the total bill, but it adds to the two-tone theme that this Velox review sample embraces. The remaining modular PSU (and SATA) cables are also expertly tucked away.

Digital Storm didn’t load the Velox with what one could consider “bloatware,” but it did install Corsair Link to control and monitor the CPU cooler, in addition to MSI Afterburner to do the same for the graphics cards, which the company overclocked past the factory settings (for an additional $45).

We didn’t see these programs loaded in the Vanquish 5 Digital Storm recently sent us for review, but then again, that particular sample didn’t have a fancy i-series Corsair water cooler or GPU overclocking services performed on it, and it seems Digital Storm will ship your system with only the software it needs to achieve its desired performance threshold.