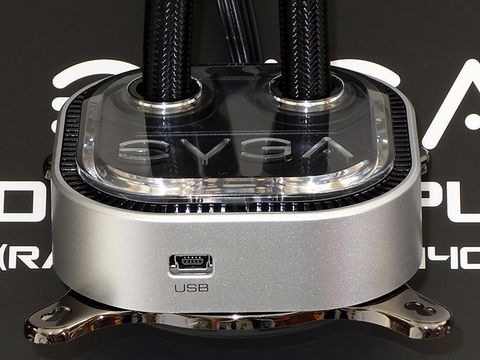 EVGA has been in the cooling business a while, but it’s been years since we’ve tested any of those products. Perhaps that’s because it took them until earlier this year to finally introduce a CLC. Welcome the CLC 280.

Indents at the center of fan frames stand out from other Asetek-manufactured cooling systems, and should help to reduce noise. We’re also hoping that any pressure that bleeds off there will assist motherboard voltage regulator cooling, since its heat sink is next to these fans. Here’s a short list of measured specifications:

A factory-filled aluminum radiator with mounted fans is factory sealed to the RGB pump/water block unit via 14.5” nylon-sleeved rubber tubing. Mounting hardware includes a factory-installed LGA115x/20xx (2011 through 2066) bracket, a legacy AMD rectangular-pattern bracket, a USB controller cable, screws and washers for radiator installation, AMD standoffs for use with the factory support plate of most legacy AMD motherboards, a set of standoffs for Intel’s LGA 2011/2011-v3/2066, another set of standoffs to match the included LGA 115x/1366 support plate, and a set of thumb nuts to secure the head unit to the standoffs.

Recent samples have arrived with a dual-pattern AMD (AM4 and legacy) bracket plus yet another set of standoffs for AM4 boards that have the protruding threads on the factory support plate. EVGA has also updated its installation kit image to show a clip-type cooler for AMD motherboards that don’t have threaded support plates beneath the clip brackets.

The CPU mating surface has the familiar, smoothly-latched finish and factory-applied thermal paste of EVGA’s ODM. It’s held tight to the CPU using a standardized bracket that can be removed by twisting counter-clockwise, and replaced with an alternative part (such as the legacy AMD bracket shown previously).

Rather than rely on motherboard firmware to set fan speed via PWM, the CLC 280 connects to the motherboard via a classic Mini USB to 9-pin USB 2.0 header cable. Only four of those pins are connected, so those oddball single-port half-headers found on some motherboards may finally have a purpose.

Special standoffs fit the integrated support plate of LGA 2011 through 2066 interfaces, and a different set of standoffs replace the clip bracket of legacy AMD boards, if the support plate behind the board has the standard threads or nuts. LGA 115x users get the luxury of attaching the EVGA-supplied support bracket to the back of their boards, using yet another set of standoffs at the front of the board.

Lighting behind the nameplate is the major RGB feature of EVGA’s CLC 280.

EVGA flow control software monitors temperatures and adjust fans accordingly. Users are welcome to set their own fan slopes, yet the biggest advantage over motherboard-based fan control might be that the software also allows users to change the color of the EVGA logo. The “K” icon forces full-speed operation.

Next Page Comparison Hardware, Evaluation & Conclusion
10 Comments Comment from the forums
Be In the Know