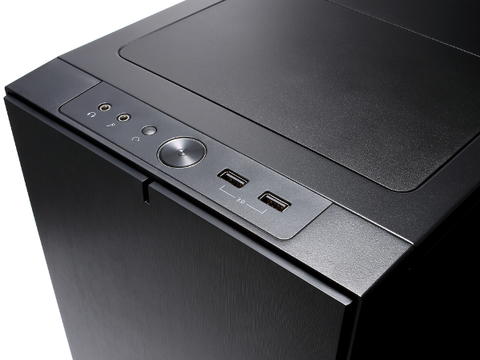 The Define S includes a basic screw pack with additional cable ties and a pair of reservoir mounting brackets.

Fractal Design omits the AC-97 audio tail that motherboards haven’t required for the past decade or so, in order to clean up the HD Audio cable.

The Power LED connector is split to support both standard (2-pin) and Asus/AT (3-pin) spacing.

Grommets dampen the vibration of 3.5” drives, but the direct mounting of 2.5” drives relies on the silence of SSDs (mechanical notebook drives are not often used in desktops).

Drives are screwed onto the trays from underneath, prior to the trays being re-attached to their corresponding positions.

Though I may personally be dismayed by the Define S’ lack of room for my 10.7” high-end motherboards, a standard 9.6”-deep ATX board leaves lots of room for additional cooling components. It’s almost a shame that I have to test it with a little air cooler.

Full-sized case reviews use MSI’s X99S Gaming 7 in place of its X99S XPower AC because so few full-ATX cases have space for the larger motherboard. Other components remain from our reference build, including its “standardized” CPU overclock.

Our new test platform runs hot and quiet, negating the dramatic performance differences its predecessor was designed to produce.

Noise is measured .5m from the case’s front corner, on the side that opens. The numbers are corrected to the 1m industry standard — used by many loudspeaker and fan manufacturers — by subtracting six decibels.

One problem in testing “Designed For Liquid Cooling” cases is that these are not designed to be used “As Delivered”. Instead, manufacturers intend for their customers to add the fans that go with their big radiators. That doesn’t make it possible to “standardize” cases tests though. Like the MasterCase that went before it, Fractal Design’s Define S finds itself at a peculiar temperature disadvantage when limited to only its factory-supplied fans.

Likewise, the “wide open” front panel lets most of the noise from internal components escape, where Fractal Design intends for its buyers to fill that gap at least with a radiator. Still, the plastic face plate keeps it a little quieter than the MasterCase 5.

By now it should be apparent that the Define S’ only real direct competition in these charts comes from the MasterCase 5, as both are designed to hold two long radiators.

The less expensive Define S has the advantage of holding two radiators without the expense of additional brackets, yet its factory fan configuration still keeps it trailing in cooling-to-noise ratio.

As with motherboards, a straight performance-per-dollar chart doesn’t award cases with extra features any extra value. That works out in Fractal Design’s favor though, because the Define S is both cheaper and with fewer features than most of its competitors.

Direct mounting of a second radiator is the one feature the Define S has over its most-direct competitor, the MasterCase 5. Cooler Master charges extra for the extension brackets and expanded top panel which allows this — unless buyers upgrade to the MasterCase 5 Pro.

For about half the price of the 5 Pro, Fractal Design offers liquid builders even more empty space to work with by eliminating things such as the competitor’s divider tray and drive cages. If you didn’t want the divider tray and didn’t plan to use the drive bays or cages, the Define S takes a value win.


MORE: How To Build A PCMORE: All Case Content