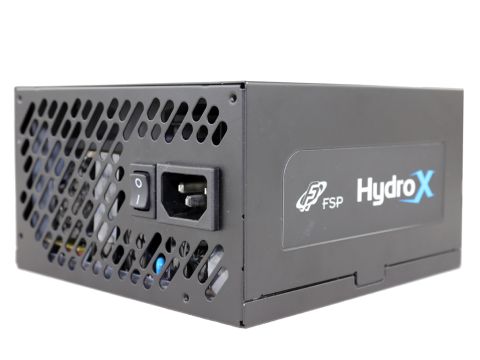 FSP's Hydro X 450 is a highly efficient and overall, a silent PSU geared towards systems with low energy needs. Its major downside at this time is its high MSRP, however we expect the street price to be much lower. The PSU's strong points are its increased reliability, thanks to the Japanese electrolytic capacitors, and the double ball-bearing fan. On top of that, the HGX450 comes with a five year warranty.

FSP is trying hard to get its products into the retail market. Until now, the company was mostly focused on OEM sales, but we all know landing on store shelves is how you get your name recognized. A while ago we reviewed FSP's 650W Hydro G PSU, which left us quite satisfied with its performance. The Hydro G line is mostly enthusiast-oriented, so its prices are on the high end (although we've noticed that they have dropped here in the U.S.). Since most PSU sales are for the lower-capacity models, FSP released a more affordable line (compared to the Hydro G lineup) called Hydro X, which covers the mainstream folks who don't really care about modular cables, but do need increased reliability and good performance.

Although the Hydro X models are more affordable than the Hydro G ones, their prices aren't as low as we expected. According to official sources, the Hydro X 450W, 550W and 650W models cost $90, $100 and $110, respectively. Fortunately, MSRPs are usually much higher than street prices, so once these products hit the market, we're hoping they're more affordable. After all, the same thing happened when the Hydro G power supplies launched.

The Hydro X line currently consists of three units with capacities ranging from 450W to 650W. These PSUs lack modular cabling, though that looks like the only compromise in their design. According to FSP, we should expect high performance thanks to an advanced platform with the LLC resonant converter on the primary side and synchronous rectification of the +12V rail on the secondary side, along with DC-DC converters for the minor rails. The 5VSB circuit promises high efficiency attributable to an advanced standby controller. Plus, Japanese electrolytic and Taiwanese polymer capacitors are used in these PSUs. And finally, their cooling fans feature double ball-bearings for increased reliability.

Today, we're evaluating the smallest Hydro X PSU with 450W capacity. Should it perform well in our tests, the HGX450 would make a great little power supply for single-GPU gaming PCs. If FSP can get the price tag closer to $70, the HGX450 might even become a good deal, considering its high-quality components.

All Hydro X units feature 80 PLUS Gold efficiency and are compatible with the C6 and C7 sleep states that Intel introduced with the Haswell processors. They're only rated to deliver their full power continuously at up to 40 °C, despite that the ATX spec recommends 50 °C. But this won't stop us from applying temperatures above 45 °C inside our hot-box during our tests. All necessary protection features appear to be accounted for, including over-temperature protection (OTP). The HGX450 is cooled by a double ball-bearing fan, which has a much longer lifespan than sleeve-bearing fans. FSP doesn't implement a semi-passive mode though; this could have increased the fan's useful life even more, also enabling zero noise output under light loads.

The unit's dimensions are compact, although it could have been smaller given such low capacity. FSP understandably leverages the same enclosure for its higher-capacity models to help reduce production costs. As a result, the HGX450 is 15cm deep. That's still on the low side, given that most ATX PSUs measure 16cm deep.

FSP covers this model with a five-year warranty, demonstrating that, despite its modest output and lack of modular cabling, this is a high-end product. Then again, the $90 MSRP already tipped you off. But a lofty price tag puts the HGX450 in a difficult position against competing models in the same class.

The +12V rail can deliver up to 37.5A, so it meets the needs of graphics cards in the 200-220W category. The minor rails are pretty strong with 120W max combined power, while the 5VSB rail has the typical amperage.

The fixed cables are long enough and the number of available connectors is sufficient for this unit's capacity. The fact that the HGX450 comes with two PCIe connectors greatly enhances its usability, since it natively works with high-end cards that have two PCIe sockets. The distance between connectors is good in the single PCIe cable. However, we noticed something strange on the peripheral cables: instead of installing the four-pin Molex connectors further away from each other and the SATA plugs closer, FSP did the opposite. This isn't logical since SSDs/hard drives are usually installed close to each other, while components like case fans are usually spread out in your case.

All of the cables employ 18-gauge wires; there's no need for thicker ones in a low-capacity PSU.

Next Page Packaging, Contents, Exterior And Cabling
24 Comments Comment from the forums
Be In the Know