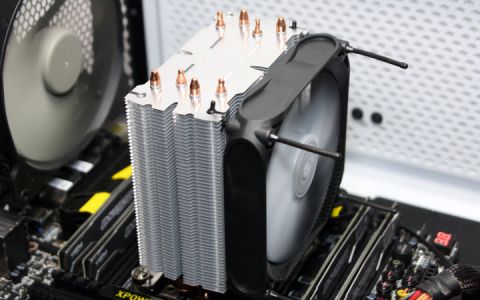 The Windale 4 is a bargain heatpipe cooler that performs well and operates at low noise levels. It's a strong value pick in CPU air coolers, for running at anywhere from stock speeds to a moderate overclock.

The FSP Group is primarily known for power stuff: power supplies and uninterruptible power-delivery systems. But the company has recently served up some intriguing CPU-cooling solutions, in the form of four- and six-heatpipe models. The six-heatpipe Windale 6 is the larger version of the quad-heatpipe Windale 4, the latter of which we will be focusing on here. We did some performance testing against similarly sized tower-cooler rivals.

The boxed contents of the FSP Windale 4 include mounting hardware for most modern CPU sockets, although AMD TR4 Threadripper is not currently supported. AMD and Intel socket mounts use a shared backplate for both manufacturers’ CPUs; our test system utilizes the Intel Socket 2011-v3’s integrated motherboard mount option for our Core i7-5930k. FSP includes a small packet of thermal paste, along with mounting hardware, although we will be using our standard thermal compound, Arctic MX-4, as we do for all of our comparison tests.

A single 25 x 120mm fan, which can be mounted on either side of the cooling tower, spins up to 1600 RPM to move air over the FSP Windale 4's aluminum cooling fins. The unpainted aluminum fins wrap around four offset copper heatpipes, each 6mm in diameter. The shimmering silver aluminum of the cooling fins contrasts nicely with the gleaming copper heatpipes for a classic, almost steampunk look, of tower coolers of yesteryear.

At the cooler’s base, the four heatpipes group uniformly together beneath the wedge-shaped aluminum mounting block and provide direct contact with the CPU's mounting surface.

The copper heatpipes and aluminum base block are finished with a fine, longitudinal grain milling. It isn’t mirror-smooth, but it provides consistent contact with effective thermal-paste application. The included mounting hardware uses this mounting block to secure the cooler in place with spring-loaded pressure once the mounting screws are secured at the corners of the installation mounting plates.

The cooling fan itself doesn’t secure to the cooling tower via snap-on mounts like most traditional coolers, as FSP has opted to use rubber tabs instead. One end of the mounting tab has a rounded button that slips into a notch cut into the cooling fins, while the longer fingers thread through the fan support holes and lock the fan into place. Excess rubber can be trimmed away unless you happen to enjoy the look of catfish-like whiskers protruding from your CPU cooler.

The four slots seen pictured in the top fin around the FSP logo are actually cut into each fin in the cooling tower. FSP states that this provides better airflow and directs heated air out of the tower assembly.

The installation instructions have you install the base mounting hardware to the motherboard, then secure the tower itself atop the CPU before adding the cooling fan. The directions also specify to install the rubber mounting tabs on the fan prior to securing the rounded buttons into the cooling fin slots. However, we found it far easier to install the rubber tabs to the cooling tower first, rather than to the fan. This meant slipping the fan over one side of the tabs, securing them, and then threading the other side tabs through and securing them. This method becomes far more obvious once the cooler is mounted to the motherboard, as it would require great dexterity to insert the rubber mount buttons to the cooling fins while working around memory DIMMs and other components in the vicinity.

Next Page Testing Results & Conclusion
3 Comments Comment from the forums