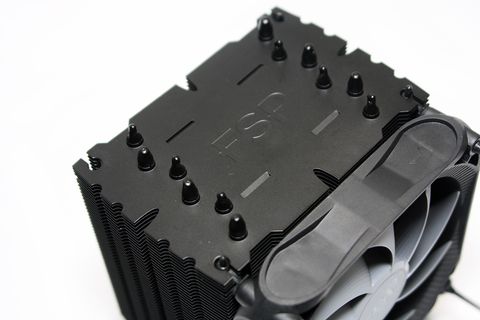 The Windale 6 is a solid-performing six-heatpipe CPU air cooler at a great price, delivering simple, good looks. We'd like to see a version with a second fan in the box, though.

The FSP Group is primarily known for its advanced energy-delivery and energy-storage solutions, including power supplies and uninterruptible power-delivery systems. The company has recently thrown its proverbial heat sink into the ring of consumer CPU coolers, with the release of the Windale 4 and Windale 6 coolers. (They are four- and six-heatpipe solutions, respectively.) We'll be focusing here on the FSP Windale 6 to see how it fares against other larger-heatpipe tower air-cooling solutions that we have tested.

The FSP Windale 6 design is typical of heatpipe CPU towers, with 54 aluminum fins aligned over six direct-contact 6mm copper heatpipes that gather under the tower within an aluminum block base. The base makes use of two alignment holes for the mounting bracket to secure and align the cooler in the course of the installation. The overall mass of the cooler's base has a quality, "feel," and balance that does not levy excessive mass that might otherwise cause concerns around strain on the motherboard.

The FSP Windale 6 accommodates recent AMD and Intel platforms, which also means that the packaged hardware includes a large selection of brackets and mounting hardware, two sets (eight total) of rubber fan mounts, and a small packet of thermal paste.

A single 120x25mm PWM fan rated for 60 CFM at 1800 RPM is also included. The entire tower is coated in a satin-finish black thermal paint that makes the tower look impressive yet tactful. The 120mm fan itself sports blue LEDs, but it does not afford any lighting control.

Underneath, we see the Windale 6 heatpipes and aluminum block are milled to allow for direct contact against the CPU heat spreader. The exposed copper on our heatpipes did show a bit of discoloration, which may be a result of the milling process, but it appears merely superficial and does not appear to hinder cooling performance. The inverted wedge of aluminum mated with the heatpipes provides thermal mass in order to allow heat to be wicked away by the copper heatpipes while also providing the platform to firmly mount the cooler using provided hardware.

While many tower coolers utilize some form of plastic fan bracket that snaps over the exterior of the fin tower, the FSP Windale 6 utilizes rubber fan mounts that are pulled through the mounting holes of the fan. Then, using the exposed rubber mounting posts, you maneuver and slide the mounts into cutouts in the cooling fins themselves to support the fan.

While this likely allows for lower cost of included hardware, it does create some difficulty, since the fan cannot be mounted onto the cooler until after the base has been secured over the processor socket. This creates some problems in getting the two bottom fan mounts in place with memory DIMMs installed nearby. The included installation guide shows to pull the rubber mounts through the fan mounts first and then mount it to the tower like the image above, but we found that affixing the rubber stems to the cooler fins first and then sliding the fan gently over them, one at a time, to mount into position turned out to be easier for us.

The FSP Windale 6 can be mounted vertically or horizontally over the CPU, depending on installation needs. For our testing, we have the cooler mounted for horizontal airflow with the fan in "push" orientation, moving air over the cooling fins toward the rear case exhaust fan. While the cooler and fan did directly cover the memory DIMMs themselves, just working in and around them proved to be a bit of a challenge in itself. As mentioned earlier, this is why we found our alternative fan-mount steps to be more effective, and while there are two complete sets of fan mounts for a push/pull configuration, only one fan ships with the Windale 6. The excess rubber of the fan mounts can also be clipped off, if desired, as it is not aesthetically pleasing.

Next Page Testing Results & Conclusions
11 Comments Comment from the forums