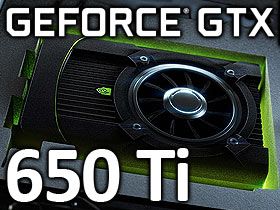 We've seen Nvidia launch three graphics cards in the last two months, all based on its Kepler architecture. Today, we bring you the fourth, and the last desktop-oriented introduction, Nvidia says, for 2012. Say hello to the GeForce GTX 650 Ti.

There's a fairly substantial price gap between the new $120 GeForce GTX 650 and $230 GeForce GTX 660, so this board's arrival is really not a surprise. After all, Nvidia needs something to do battle with AMD's Radeon HD 7770 and 7850, along with replacing its own GeForce GTX 560. The Radeon HD 6850 and 6870 are still floating around, too, and those cards remain attractive options in the same price range. The GeForce GTX 650 faces a formidable battle if it wants to prove its worth at $150.

Nvidia arms its new value-oriented contender with the same GK106 GPU we saw in Nvidia GeForce GTX 650 And 660 Review: Kepler At $110 And $230. Only, this time around, parts of the chip are disabled in order to create a performance profile that fits between the GeForce GTX 650 and 660.

GK106's third (and curiously asymmetric) GPC is disabled, as is one of the chip's ROP partitions and one of its 64-bit memory interfaces. The resulting configuration yields four streaming multiprocessors totaling 768 CUDA cores and 64 texture units. The remaining two ROP clusters can output 16 full-color raster operations per clock, and the aggregate memory interface is 128-bits wide.

Most of the GeForce GTX 650 Ti's specifications end up somewhere between the recently-introduced GeForce GTX 650 and GTX 660, except for the memory subsystem. A similar 128-bit interface and 16 raster ops per clock are virtually identical to the GeForce GTX 650. A small bump in data rate accounts for the tiny bandwidth increase from 80 GB/s to 86.4 GB/s. Unfortunately, that's a long way off from last generation's GeForce GTX 460 with the 256-bit bus. Even AMD's older Radeon HD 6850 and 6870 cards offer 128 and 134 GB/s of throughput.

If Nvidia's new budget-oriented board has one weakness for folks looking to game at higher resolutions with anti-aliasing applied, based on what we know about the GeForce GTX 650 and 660, memory bandwidth is going to be it. This is an area where overclocking stands to really help the reference configuration's performance.

The GeForce GTX 650 Ti's diminutive 5.75" x 4" PCB reminds us of the low-end GeForce GT 430. It's a surprisingly fast card, however, despite its compact dimensions.

Nvidia's reference design is equipped with 1 GB of GDDR5 memory. The back side of the PCB is bare, though you'll find memory modules there on more expensive 2 GB versions of the card. By default, memory operates at 1350 MHz, yielding an effective 5400 MT/s data rate. The GK106 GPU itself runs at 925 MHz, and there is no GPU Boost functionality available, similar to what we already saw from the GeForce GTX 660.

The sample we received only has one mini-HDMI and two dual-link DVI outputs, though we know the Kepler-based GPUs we've reviewed so far actually support up to four screens at a time. Add-in board vendors have the option to expose additional display connectivity if they choose, and we'll be checking out a couple of partner boards on the following pages.

A 110 W TDP requires a single six-pin auxiliary power connector, since a PCI Express x16 slot is only able to supply 75 W.

There is no SLI connector on the GeForce GTX 650 Ti. Although some lower-end boards support multi-card configurations over the PCI Express, Nvidia deliberately handicaps this model by preventing cost-conscious gamers from buying one card today and adding a second one down the road. AMD, in comparison, allows for CrossFire operation on its Radeon HD 7770 and 7750 boards.

The reference cooling solution employs one 75 mm axial fan, and, according to our measurements, it does a satisfactory job of keeping Nvidia's 28 nm cool without generating much noise.