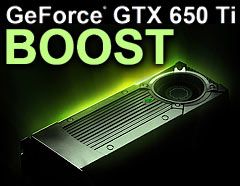 Rare is it that one graphics processor vendor holds onto an important price segment uncontested. However, Nvidia's GeForce GTX 650 Ti was the only compelling $150 card for darned near six months. Similarly, AMD's Radeon HD 7850 locked down the segment right above that, ranging between $175 and $200, depending on how much memory you wanted.

Less than a week ago, though, AMD introduced its Radeon HD 7790 for $150, encroaching on previously uncontested space. Based on a new Bonaire GPU, the first member of AMD's Sea Islands family, it fired a shot across Nvidia's bow. And now Nvidia fires back with the GeForce GTX 650 Ti Boost, jockeying for attention in the same market as the Radeon HD 7850.

While AMD manufactured a new ASIC for its Radeon HD 7790, Nvidia is recycling the GK106 graphics processor already featured on the GeForce GTX 650 Ti and GeForce GTX 660, both of which surround the Radeon HD 7850's $175 to $200 price range. It makes sense to employ that same, successful graphics processor to address the hole in Nvidia's line-up, and that's what the company is doing with its latest offering.

Put simply, GeForce GTX 650 Ti Boost combines the setup and shader configuration of Nvidia's GeForce GTX 650 Ti with the 660's back-end and 192-bit memory interface. This is a good thing, we think. On several occasions, we've seen the GeForce GTX 650 Ti limited by relatively low memory bandwidth. Although GK106's third asymmetrical GPC is disabled, all of the chip's ROP partitions and 64-bit memory controllers are left intact. The result is four streaming multiprocessors totaling 768 CUDA cores and 64 texture units. Three ROP clusters output up to 24 full-color raster operations per clock, and the aggregate memory interface is 192-bits wide thanks to a trio of 64-bit controllers.

In addition, the new card's core clock is up to 980 MHz, which is 55 MHz more than the GeForce GTX 650 Ti and identical to the 660. As its name indicates, Nvidia enables GPU Boost on this model, claiming that the core typically sees at least 1,033 MHz. Combine that with the same 1,502 MHz GDDR5 memory (yielding 144.2 GB/s of bandwidth) found on GeForce GTX 660, and there's good reason to be optimistic about the balance struck by GeForce GTX 650 Ti Boost. In fact, based on its specifications, we're expecting this card to perform more like the GeForce GTX 660 than the 650 Ti. The benchmarks will show whether that's the case, though.

The differences between Nvidia's cards are important, but we're far more interested to know how GeForce GTX 650 Ti Boost fares against the Radeon HD 7850.

Considering that the GeForce GTX 650 Ti Boost employs the same GPU and memory interface, we're not surprised that it looks a lot like Nvidia's GeForce GTX 660 reference card. There's not a single feature distinguishing one from the other. The PCB even appears to sport the same traces.

As we saw on the GeForce GTX 660, this card's PCB is only 7" long, with almost 3" of overhang attributable to the fan and shroud. There are GeForce GTX 660 models available with smaller coolers, so it's likely that shortened GeForce GTX 650 Ti Boost cards will surface, too.

Four of this model's memory modules are easy to spot, uncovered, on the back of the board.

A single 65 mm fan keeps the card cool, while exhausting heated air out through its I/O bracket. A single SLI header indicates support for dual-card configurations, and simultaneously tells us that three- and four-GPU arrays are not possible.