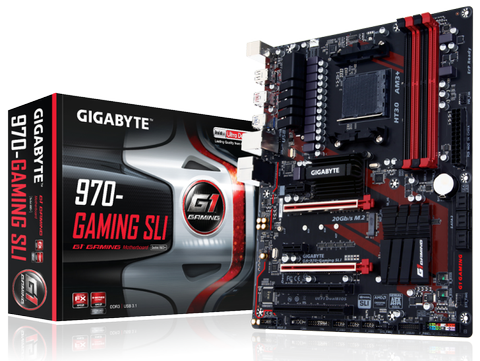 A decent choice for a replacement board or entry level build, Gigabyte GA-970-Gaming SLI buyers could save enough money to buy a better GPU.

Over the past couple months, I have been walking my way down memory lane testing AMD’s A78, 990FX, and 970 chipsets. Throughout the process, I’ve learned a couple things, tweaked my setup, and received some great community feedback.

These past few articles in particular have been heavily geared towards the gaming crowd. Some products have bundled software packages for streaming or media consumption, some have extreme-low latency, lag-killing network controllers, and lights, and others aim to include high-end peripherals by featuring M.2 and USB 3.1.

Which of these features are important? Tell me what you think in the comments.

Gigabyte offers its own gaming-branded rendition: the GA-970-Gaming SLI motherboard. It uses the 970 chipset and SB950 combo and offers several of the same connectivity options of the higher-end 990FX chipset. Since the Gigabyte A78 board I previously reviewed received a Tom’s Hardware Recommended award, and other offerings from the company's G1 Gaming series have received high marks from my colleagues, I have high hopes for this contender.

The Gigabyte GA-970-Gaming SLI follows a typical race car-themed packaging and branding. Announced in March 2016, this board joined a slew of gaming motherboards with USB 3.1, a PCIe x4 M.2 slot, and other modern features for this very old chipset. As always, Gigabyte marks this board with its Ultra Durable classification. On the box, Gigabyte is clearly trying to catch buyer attention by devoting ample real estate to descriptions of ambient LED lighting, 115 dB high-definition audio, and its gigabit Ethernet networking solution.

I was pleasantly surprised with the contents and arrangement of the components in the box, which include four SATA cables, a padded back panel plate, manual, installation guide, and driver disc, all standard fare for products in this price range. Gigabyte kicks it up a notch with some extras: an SLI bridge, G1 Gaming sticker and door hanger, and a Gigabyte G connector for connecting those loose case power headers to the board.

I am a fan of the smaller heatsinks on the regulators and south bridge of this board. Also, the stylized silk screen on the board helps amplify the race car theme. The back panel USB configuration includes two USB 3.1 Type-A ports, two USB 3.0/2.0 ports, and six USB 2.0/1.1 ports. Combine that with one PS/2 port, one gigabit Ethernet port connected to the Intel GbE controller, digital S/PDIF output, and five audio jacks to round out the necessary gaming connections. Looking at the PCB, just below the back panel is the shielded audio portion of the board, which includes a red ambient LED strip.

The bottom of the board contains all of the extra port connectors, including front panel audio, several USB header options, colored front panel connectors (which can use the G connector), as well as our first three-pin fan header. Tucked away between the two metal-clad PCIe x16 connectors is the M.2 PCIe x4 connector, which supports both NVMe and SATA SSDs.

The right side of the board has a four-pin system fan header as well as six angled SATA3 ports before the ATX power connector comes in. Right above that is another three-pin header that is very oddly placed.

The top of the board has four DIMM slots with dual latches. Past the socket is the last four-pin fan header for the CPU. Also, tucked in next to the voltage regulator heatsink is the eight-pin CPU power connector, which could have benefited from being a few more millimeters away from the hunk of metal.

Overall component placement is satisfactory, but a couple of items stand out. With only four fan headers, it's odd not to have a header closer to the traditional exhaust fan location. Also, the fan header above the main ATX power connector seems out of place. Once the ATX power cable is connected, maneuvering around the case to install the fan requires a surgeon's dexterity or the hands of a first grader.

Similarly, the four-pin CPU fan header did not let me reduce the speed of my three-pin fan through the BIOS voltage control. By routing that fan to one of the spare three-pin ports, I was able to get the fan speed to the proper setting. Needless to say, I had wires routed all across my test case.

My last, and minor, gripe is the PCIe x1 ports: they are very close to the back panel and M.2 connector. This doesn’t affect my system configuration, but some users might find that additional cards have clearance issues with more complicated GPU heatsinks or longer M.2 cards.