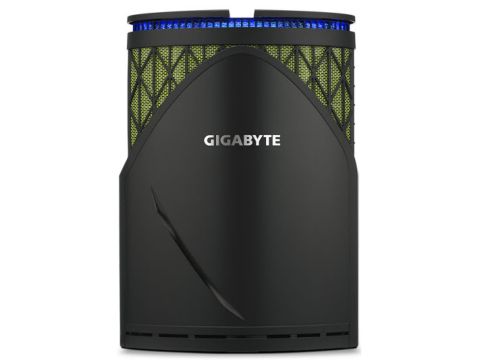 Gigabyte's Brix Gaming GT desktop PC maybe on borrowed time with its aging Intel Core i7-6700K processor, but finding a SFF gaming rig with an equally powerful CPU and a full-sized GTX 1070 GPU for under $1,100 would be a tough task. The Gaming GT stands out for more than just its price alone; the design is unique and eye catching, and the custom cooling system manages to keep the desktop components from throttling (although barely, and it's quite loud when doing so). You can't overclock, despite the unlocked CPU and Z170 chipset, but the average consumer will likely (and understandably) not miss this feature. We'd have considered this a contender when it originally debuted at $1,700, but now that the price has dropped (along with our jaws), we're giving it a Tom's Hardware Approved Award, and would highly suggest grabbing it before its gone for good.

At $1099, the green-accented oddity may be an attractive buy for performance-hungry gamers, and Gigabyte certainly did everything in its power to stand out in the SFF gaming PC market with its BRIX-branded GB-GZ1DTi7 Gaming GT. Let’s see what it can do.

The Gigabyte GB-GZ1DTi7 Gaming GT is unlike any PC we’ve encountered before. For lack of a better description, it resembles a 10L trash can, devoid of any windowed side panels or boxy edges that many SFF PCs embrace. The company logo is prominently displayed on the sides of the device, and it has a sleek yet edgy look with the green cyber web-like accents. The plastic chassis is surprisingly sturdy, albeit awkwardly weighted.

The cornerstone of this device is its automated exhaust system. The top of the case features two panels that automatically open to vent heat out of the chassis when the CPU reaches 80°C. However, it doesn’t automatically close after it cools back down, and you have to push down on the panels manually (not so automated after all). RGB LED lighting adorns the top vent, and it definitely stands out when the vents are open. We’re not entirely sure how this cooling system will affect performance, but our benchmarks should let us know the full story.

The front panel (which is little more than a USB port in width) features two USB 3.0 ports, in addition to mic-in and headphone-out 3.5mm audio jacks. The rear I/O, which is hidden by a breakaway panel, consists of three USB 3.0 ports and USB 3.1 (Gen 2) Type-C and Type-A ports (one each). Display output is provided by the dedicated GPU’s HDMI 2.0, DVI-D, and three DisplayPort 1.2 interfaces. The motherboard also features an HDMI 1.4 output, but you won’t be needing that unless you want to chain multiple displays together.

All of the GPU’s display outputs and the system’s power connector reside on the underside of the chassis. Fortunately, Gigabyte included an angled DisplayPort adapter, an HDMI extension cable, and a DVI-D cable (with an angled plug) to comfortably connect your display. Even the power cable is angled. The trick is to feed all the cables out of the thin gap in the chassis at the bottom rear of the case, allowing you to set the Gaming GT upright without sitting on a stray cable and still connecting your display and power plug.

Believe it or not, the Gigabyte Gaming GT desktop is upgradable. To open the device, we had to remove the seven screws (the only visible screws on the entire device) on the underside of the case (where the GPU outputs and power connector are) and slide the side panels upward (away from the bottom). The bottom can also detach to give access to the GPU (in case you want to replace it down the line), but we left it on so we could set the device upright for these photos.

The right side of the device houses the motherboard, giving you direct access to the memory slots, CPU cooler, and M.2 storage. Four heat pipes pull heat away from the processor to other plates and cooling fins, with an 80mm fan pulling air up from the bottom of the chassis and pushing it up towards the vents at the top. The left side has two 2.5" drive bays (one of which is occupied with a 1TB 7,200RPM HDD) and the graphics card.

One could expect that a system with an unlocked processor and overclockable chipset would, naturally, overclock. However, the Intel Core i7-6700K and Z170 chipset motherboard are devoid of any overclocking capabilities, leaving the CPU’s clock speed at its stock 4.0GHz base clock and 4.2GHz max turbo frequency. We even reached out to Gigabyte to confirm this, and the company’s reply is as follows:

“The BIOS doesn't allow for overclocking. It is built upon a BRIX solution with BRIX power phases. Overclocking is not recommended due to thermal constraints and VRM stability so we didn't allow the option to do so.”

Despite the seemingly stunted Z170 platform (so much for overclocking), the memory and storage form factors are well-suited for a SFF gaming PC, with the Gigabyte Gaming GT featuring 16GB (2 x 8GB) of DDR4-2133 SODIMM memory and a 240GB Transcend MTS800 SATA III M.2 SSD. A 2.5” 1TB 7,200RPM HDD supports the conservative solid-state storage capacity with enough room for a sizable game library and applications or files that don’t require the speed of an SSD. There's also room for another 2.5" drive, so you can always upgrade later on.

Most notably, the tall-yet-small Gaming GT somehow houses a full-sized company-branded GPU: a Gigabyte GeForce GTX 1070 G1 Gaming 8GB graphics card. Moreover, this is the triple-fan (bigger) version of the GTX 1070 G1, which features higher clock rates than company’s dual-fan model. However, it takes up more of the little precious space available inside the case. We’re not sure what this will mean for thermal performance, but it’s decidedly ambitious of Gigabyte to go with a GPU only slightly smaller than the longest point of the chassis.

The Gaming GT features a 400W flex-ATX power supply, which is below Nvidia's recommendation of a 500W PSU for the GTX 1070 (including the Gigabyte G1 Gaming). This could result in throttling from either the CPU or GPU (depending on workload and power demand), but we’ll have to wait to see the benchmarks before making any certain declarations as to how this will affect performance (if at all).

Gigabyte loaded the Gaming GT Desktop with some useful software (we certainly wouldn't call it bloatware), including Adobe Reader XI, Nvidia GeForce Experience, Intel HD Graphics Center, and the Killer Network Manager application. The company also ships the Gaming GT with its Smart USB Backup software, which will create recovery media with a USB flash drive. Gigabyte's Ambient LED application controls the RGB lighting at the top of the chassis, giving you the ability to change the colors, effects, and time intervals.

The Gaming GT also ships with a driver disk (in case you need to/want to re-image your PC), in addition to the previously mentioned display cables and adapters. There's also an 8-pin PCIe power extension cable, presumably for upgrading the GPU to something that requires a second 8-pin connector (the GTX 1070 Gaming G1 sports a single 8-pin connector). Although we didn't remove the GPU for our review, we'd venture to guess the 8-pin lead that goes to that extension cable is behind it.