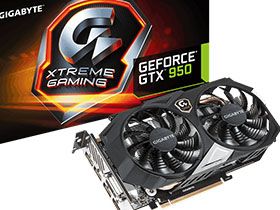 This is a perfect performance solution for 1080p or less gaming. This card takes another jab at questioning why the GTX 960 even exists anymore. The performance per dollar from this card will be hard to match, and all gamers on tight budgets should seriously consider the GTX 950 Xtreme Gaming as their gaming solution.

Gigabyte's GeForce GTX 950 Xtreme Gaming is the company's top offering equipped with GM206-250. It employs a custom PCB design, the familiar Windforce cooling solution and a highly overclocked processor that was cherry-picked by the company's GPU Gauntlet sorting process.

Nvidia launched its GeForce GTX 950 back in August, targeting gamers with FHD monitors (particularly the ones competing in multiplayer online battle arena titles like League of Legends). The 950 uses the same GPU found in Nvidia's GeForce GTX 960, but the GM206 processor is trimmed down somewhat. Instead of 1024 CUDA cores, the 950 wields 768. Cutting two SMMs also reduces the texture unit count from 64 to 48, while the back-end retains 32 ROPs. Nvidia's reference specification defines a base GPU clock rate of 1024MHz, with a typical GPU Boost setting closer to 1188MHz. The GeForce GTX 950 is only offered with 2GB of memory; there is no 4GB option. On-board GDDR5 operates at 6.6 Gb/s across an aggregate 128-bit bus.

When paired with Nvidia's GeForce Experience software, the GTX 950 can optimize MOBA games for responsiveness. This feature will expand to other cards in Nvidia's line-up. But in August, when the GTX 950 launched, it was the first card with this capability. Input response is critical in those titles and Nvidia found that multi-frame buffering was causing delays. To combat this issue, multi-frame buffering can be disabled completely.

We previously looked at a GTX 950 Strix card from Asus that was also overclocked out of the box. Gigabyte's GeForce GTX 950 Xtreme Gaming boasts even higher frequencies than the Strix. Let's take a closer look.

As mentioned, the GPU Gigabyte uses is selected from the most efficient that the company finds during its GPU Gauntlet selection process. It claims this process guarantees higher overclocks compared to random selection, which makes sense.

The base clock from a reference-class GTX 950 is 1024MHz with a typically GPU Boost frequency of 1188MHz. Gigabyte's Xtreme Gaming card sports a 1203MHz frequency typically able to hit 1405MHz.

The GTX 950 is similar to the more expensive GeForce GTX 960, though one of its key differences is the memory subsystem. Nvidia's spec calls for 6.6 GT/s memory, whereas the 960 employs a 7 GT/s transfer rate. Gigabyte goes that extra step with its GTX 950 Xtreme Gaming and pairs it with 2GB of 7 GT/s memory. Looking at the specs on paper, it appears that Gigabyte is cutting the rug out from its own 960s.

The GTX 950 Xtreme is equipped with a dual-fan Windforce cooler to keep the on-board components running coolly. Gigabyte has been using the same fan design for some time now, and it's proven effective. Each blade has a triangular protrusion in front of a row of five indented strips. Gigabyte says this design greatly reduces air turbulence and increases cooling capacity. Air traveling through the fans passes over the sink's horizontal slats, which helps cool the two 6mm copper heat pipes that directly contact the GPU and pass through the sink in opposing directions. The voltage circuitry doesn't touch the main sink; however, Gigabyte installs a separate heat sink on the VRM to cool it as well.

The word that comes to mind when I look at the GTX 950 Xtreme Gaming's shroud is "exoskeleton." The plastic surrounding the fans and covering the heat sink leaves a lot of room to peer inside. This is undoubtedly intended to maximize heat transfer. Rather than wrapping around and attaching to the PCB, enveloping the whole heat sink, Gigabyte attaches its shroud directly to the heat sink fins. As a result, the plastic looks like it's suspended just above the card. But even the sides that wrap around make no contact with the heat sink or PCB.

This card's cooling solution extends an inch and a half beyond the 7.25-inch printed circuit board (the back plate and plastic shroud make up the last half-inch of length). It appears as though the longer cover was only included to make room for the second fan. The blades extend just beyond the end of the heat sink fins, so it's a mystery why Gigabyte didn't just extend the fins as well.

A robust thermal solution is necessary for enabling aggressive overclocks. But to ensure reliability, you need more than just a good cooler. Gigabyte engineered the GTX 950 Xtreme Gaming to last by including the same high-quality chokes and capacitors found on the Titan X. The company also coats its PCB to protect it from moisture, dust and corrosion.

The card does feature nods to the gaming aesthetic as well. On its top side, Gigabyte embeds an illuminated Windforce logo. When the card is off, the logo is plain white. But when it's on, Gigabyte's OC Guru III software lets you configure a backlight. Choose between seven different colors, always-on, breathing or corresponding to GPU activity. In addition to the logo, Gigabyte adds a pair of lights that indicate when the card is in silent mode and its fans are stopped. These can be disabled in the software, if you want.

The top edge of the card includes one SLI connector, allowing two cards to operate cooperatively. Gigabyte chooses to add a single eight-pin auxiliary power connector, which is also found along the top edge, facing upward. There is a cutout in the PCB that lets the plug be installed with its lock-tab facing outward, simplifying removal. It'd be nice to see other add-in card manufacturers add little touches like this.

At first glance, it looks like Gigabyte went with Nvidia's reference suite of display outputs. You get three DisplayPort interfaces and one HDMI port in a row, along with a DVI-D connector right below. But upon closer inspection, the layout is different. Nvidia puts one DisplayPort output up top, followed by the HDMI port and then two more DP connectors underneath. Gigabyte has the three DisplayPort interfaces next to each other, with HDMI at the bottom of the row.

Gigabyte doesn't include a lot of extras with its GeForce GTX 950 Xtreme Gaming. There's a DVI-to-VGA adapter and a nifty metal case badge bearing the Xtreme Gaming logo.

The packaging itself is very much over-engineered, though. Considering the size of the box, I was expecting a much larger card. However, the box was stuffed with thick foam that seems intended to absorb rough handling.