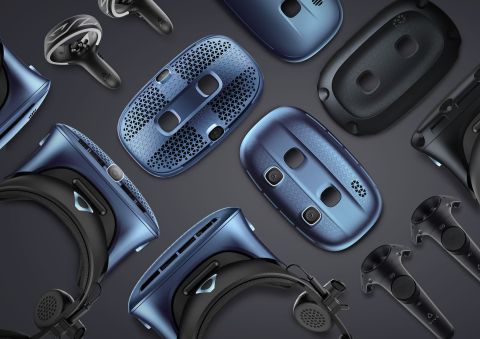 The Cosmos Elite with the External Tracking Faceplate gives you everything you need in a VR headset, but the price makes it a tough buy against the current competition.

In our HTC Vive Cosmos review last fall, we checked out the vendor’s latest take on the best VR headset for consumers. The PC-connected headset boasts a handful of advantages over previous Vive headsets and other competing VR head-mounted displays (HMDs). It includes a pair of 1440 x 1700 resolution LCD panels with RGB subpixel arrangements for superior image clarity—save for those deep blacks. And it adds a flip-up visor that makes it easy to jump back and forth from VR to the real world.

The Vive Cosmos also introduced a new tracking solution, but that feature didn’t live up to expectations. Earlier, Vive models relied on Valve’s SteamVR tracking technology and used external base stations, whereas the Cosmos uses an inside-out tracking solution powered by six on-board cameras.The camera-based tracking solution allowed for a streamlined setup process that didn’t include mounting base stations in opposing corners of your room. However, it felt like a step backwards in some respects and segregated the Vive Cosmos from the rest of HTC’s Vive ecosystem, such as the Vive Tracker accessory lineup introduced in 2017 that lets you enhance body tracking and use controllers with familiar shapes, like that of a sports racket.

Fortunately, HTC designed the Cosmos with a modular design that allows for swappable faceplates that change the function of the device so it can grow with you over time. The modular device should enable compatibility with future technology advancements and has enabled HTC to offer backwards compatibility with SteamVR hardware.

The Elite version of the headset features a black finish that matches the new faceplate. We already had a Cosmos in our lab, so HTC sent us a faceplate to fit on our blue headset for testing. HTC said there should be no difference between the two external tracking configurations.

When I first took the Cosmos External Tracking Faceplate out of the box, I was surprised by how little there is to it. It’s very light and doesn’t include much in the way of electronics. There is a data port that connects to the headset and a small PCB that connects to the array of sensors embedded in the faceplate. The faceplate also includes a receiver for the Vive controllers.

A translucent plastic covers the front of the faceplate and allows you to see the tracking sensors inside. The External Tracking Faceplate features 30 Triad Semiconductors TS4231 sensors, which are compatible with both first-generation and second-generation SteamVR base stations.

The new faceplate includes three air vents on the top and three on the bottom to allow heat to escape. It also includes a vent for the internal fan and ports for the two front-facing cameras.

The installation process was easier than I anticipated. Since I already owned and used a Cosmos, I first unplugged it from the Link Box that comes with the Cosmos for connecting it to PCs. This ensured that no power was running through it as I swapped components. Next, I located the faceplate release switch next to the left lens inside the visor and pressed it down.

The release may be stiff and could require a moderate amount of pressure. You should feel a slight click when the faceplate lock releases. I was able to gently pull the faceplate off the front of the headset; it should not require much force. If the faceplate doesn’t come off easily, press the release button again.

To install the new faceplate, I lined up the data port with the socket on the headset. Afterward, I gently positioned the faceplate and then lightly pushed it down until it snapped into place. You may need to push it in on the top and bottom as well as in between the front cameras to ensure it fits securely. Once I had the faceplate installed, I reconnected the headset to my PC.

If this is the first time that you’ve used a Cosmos headset on this computer, you will need to install Viveport and the Vive software. You can find the installation files on Vive’s website. If you already have the Vive software installed, it should automatically prompt you to update when the new faceplate is detected.

The Vive software installation is slightly different when the External Tracking Faceplate is present. Rather than going through the Vive room-scale configuration, the software prompted me to do the setup through SteamVR. The Vive software even directed me to SteamVR to monitor controllers and other accessories.

To pair controllers, you open SteamVR, click on the hamburger menu in the upper left, scroll to Devices and select Pair Controller. SteamVR will walk you through the process of pairing your input devices. By default, SteamVR will look for Vive controllers, but it also allows you to connect Index controllers and Vive Trackers.

When we first tested the Cosmos, the biggest problem we had with it was tracking accuracy in low-light situations. HTC has done a lot of work to improve the inside-out tracking system with software updates, but you don’t have to worry about any of that if you have an External Tracking Faceplate on your Cosmos.

The proven tracking accuracy of the Vive base station solution translates perfectly to the Cosmos. HTC managed to create a shape that, from all angles, captures the infrared light that the base stations cast into the play space.

If your prefer VR experiences involve standing up and moving around, the External Tracking Faceplate should give you comparable tracking to that of a Vive or Vive Pro. However, if you’re playing a seating game like, Elite Dangerous or Project Cars 2, you should ensure that you face a base station while playing because there aren’t many sensors on the sides, and none of them face backwards. If you have heavy traffic in your room, you may find the built-in cameras provide better tracking accuracy because the base stations require line-of-sight to the headset for SteamVR tracking to function.

In most cases, SteamVR tracking will work exceptionally well.

The front-facing cameras don’t even provide a passthrough view for the chaperone. HTC recommends flipping the visor if you need to see the real world. It’s unclear if a future software update may change that, but currently, the Cosmos’s cameras only work with the inside-out tracking faceplate installed.

HTC recently revealed a Cosmos XR model, which includes pass-through cameras for augmented reality (AR) experiences, although we may never get to use that one since it’s for currently for developers only.