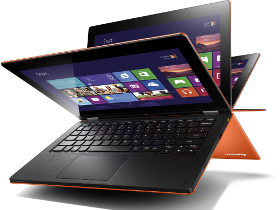 With Windows 8 slowly  picking up momentum, the constantly-evolving touchscreen-enabled hybrid Ultrabook/tablet is also becoming more commonplace. In the race to discover the perfect form factor, PC manufacturers need to think more aggressively outside the proverbial box to earn your business. The IdeaPad Yoga 13 is a prime example of Lenovo’s approach to this unique market.

Labeled as the world’s first multi-mode Ultrabook, the IdeaPad Yoga 13 appears to be ready for virtually any Windows 8 mobility scenario the casual user, student, or professional can throw at it.

The Yoga 13 is capable of assuming any of four different orientations, or "operational modes": Laptop, Stand, Tent, and Tablet.

This traditional mode resembles any other clamshell-style Ultrabook or laptop PC. As with all typical laptops, the keyboard and touchpad serve as the primary input in this configuration. However, having the added benefit of a touchscreen provides the Yoga 13 with a welcomed third input option. Obviously, Laptop Mode is useful for basically any task that you would use a notebook for, such as office productivity, photo editing, light gaming, email, and Web browsing, just to name a few.

In Stand Mode, the screen is capable of being rotated well past 180 degrees. The exposed keyboard and touchpad faces the same surface that the system rests on, so the touchscreen becomes your only input. This mode is particularly suited for viewing video content because, unlike the Yoga 13's next mode, Stand Mode allows you to adjust the tilt of the screen to find that perfect viewing angle. Likewise, this orientation is also great for teleconferencing, since tilting the screen also adjusts what's captured by the embedded HD webcam.

Tent Mode is very similar to Stand Mode, though the Yoga 13's screen opens beyond 270 degrees to create a tent shape in this mode. Here, the Yoga 13 stands on its outer display and base edges, with the hinged section facing up, allowing the touchscreen to be aimed towards the user or viewing audience. Tent Mode is handy for viewing recipes in the kitchen, following laptop service manuals in the tech shop, or simply serving as a digital picture frame placed tastefully on a shelf or desk.

By rotating the Yoga 13's screen all the way back 360 degrees, we enter its Tablet Mode. In this mode, the back of the screen housing rests on the outer base portion of the system itself, giving the user a solid-feeling touchscreen-only handheld device.

However, in Tablet Mode, the keyboard and touchpad are still exposed to the elements on the rear side of the unit, which is what we like least about this orientation. At least the keyboard and touchpad are automatically deactivated after the screen is rotated beyond 180 degrees (basically anything past Laptop Mode). As expected, Tablet Mode is very capable of performing tablet-oriented tasks such as email, reading, casual gaming, and Web browsing with native support for Adobe Flash and HTML5.

Physical flexibility is not the Yoga 13's only standout feature. This is also one seriously thin convertible Ultrabook.

How Thick Is Thin?

The Yoga 13 is clearly thinner than many of the other Ultrabook solutions out there, including the smaller, swivel-display Dell XPS 12. In fact, at just 0.67" tall, the Yoga 13 even narrowly slides under the MacBook Air's already-impressive 0.68" Z-height.

While retailers are offering some pretty hefty "Ultrabooks", complete with hard disks and even optical drives, the Yoga 13 is a legitimate and true ultra-slim notebook that simply doesn't have enough "Z" to accommodate such old school components.

Starting at $999, the Yoga 13 is available directly from Lenovo USA in numerous customizable configurations. Choice of colors include the default Silver Gray and the flashier Clementine Orange. We opted to keep the color stock, and instead invested in some of the mid- to high-end hardware options offered. The table below lists the system specs of our Yoga 13 evaluation unit:

Overall, Lenovo keeps the third-party bloatware to a minimum on the Yoga 13. Unfortunately, the installation is not entirely pristine. Some of the usual suspects are pre-installed at the factory, and include McAfee’s Security Advisor, eBay, and Skype. Other applications automatically bundled with the system include Evernote, Rara.com music streaming, and Intel’s AppUp gateway. Lenovo also tosses in its own Cloud Storage solution (powered by SugarSync) and its well-balanced Lenovo Support utility. Although an option when ordering our Yoga 13, we opted to proceed without Microsoft Office 2010 being factory-installed.

Next Page Exterior: First Impressions Are Important
20 Comments Comment from the forums
Be In the Know