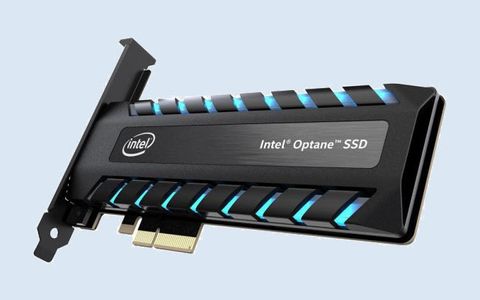 You don't just reach into the NVMe SSD box and pull out any drive to compare to Intel's flagship Optane SSD. These drives have to go toe-to-toe with the champ, so we grabbed the powerful new 1TB Samsung 970 Pro and EVO SSDs as well as the other leading flash-based products. We also included the HP EX920 and the RGB Plextor M9Pe, which are two of the more exciting flash-based SSDs on the market. The Optane SSD 905P's biggest challenge comes from Intel's own 480GB 900P and its less-expensive 118GB 800P M.2 SSD.

The Optane SSDs will take some losses early in our tests. Intel's seven-channel controller dedicates one channel to ECC and metadata, which is a slight disadvantage compared to the NAND-based SSDs with eight channels. Most applications respond best to random performance, but some specialty applications buck that trend. For instance, editing 4K video uses sequential data, so simple renders would likely be faster with something like the 970 Pro. Other video-related tasks like effects could go either way. We'll explore those details further in our next Optane review.

We're introducing this new test, which measures load times using Final Fantasy XIV's inbuilt benchmark, to show how some SSDs can load gaming scenes faster than lesser drives. To ensure accuracy, we're presenting an average of five test runs. We expanded our test pool for this test to give you a better understanding of performance with several types of drives.

It's important to understand that these are system-specific tests. We used an Intel Z270 platform and a Core i7-7700K processor running with the all-core enhancement BIOS setting. Over the next few weeks, we'll explore other systems to examine how increased processor core counts impact the results. For now, the results are clear: the Optane SSDs outperform the other products, but not by a large amount.

Most SSD vendors spec their drives with several workers pounding the drive at the same time. We managed to surpass Intel's 2,600 MB/s sequential read spec with a single worker. The Optane 905P accelerated to ~2,700 MB/s at queue depth (QD) 2 and stayed steady throughout our test. The NAND-based drives all reached higher peak throughput numbers, but most of them are slower than the 905P at low queue depths.

We also blasted through Intel's 2,200 MB/s sequential write claim. We knocked on the 2,400 MB/s door at QD2, but it still wasn't enough to take down the two Samsung 970 SSDs and the new SanDisk Extreme Pro.

The story changes when we move over to sustained sequential writes. The Samsung 970 Pro with MLC flash retains its high level of performance at QD1, but most flash-based drives can't sustain those speeds once the SLC buffer is full.

The Optane 905P doesn't have that problem, but its performance is less consistent than we expected. Both the 900P and 905P reach similar peaks throughout most of this test. The baseline performance is still very high for both drives, and we didn't see any significant performance degradation.

We see more dramatic changes when we move to the random workloads that are a better measure of desktop PC performance. All three 3D XPoint-based drives deliver superior performance at low queue depths. Lower latency typically equates to higher IOPS, so this high performance is largely due to 3D XPoint's superior latency. That's important because latency has a direct impact on responsiveness. The 905P is in a class of its own at QD4 and beyond.

Intel also stepped up its random write game with the new 905P. The 900P and 905P have similar performance at QD1 and QD2, but everything beyond that is a demonstration of the 905P's brute force.

During this test, Intel shuts down all the negative talk about the 9-Series' sequential performance. If you spend $360 to $1,300 on an SSD, hopefully you abuse it with heavy workloads and merciless multitasking. You don't need to hit these drives with extreme workloads, though, to see more performance than the best flash-based SSDs. You just have to use applications that take advantage of what's available. At realistic queue depths, the 900P and 905P are much faster than any other SSD.

The same trend carries over to mixed random workloads. The Optane SSD 905P takes mixed random performance to new levels. At QD2, the 905P delivers three times more performance than the best flash-based SSDs. As we mentioned in a previous section, this is really about latency and the user experience.

Optane drives forgo TRIM because they don't have to clean cells with the latency-killing read, modify, write process before they write new data. That's a massive advantage over other drives. Users with heavy write workloads will experience the most benefit.

The Optane SSD 905P delivers similar performance to the 900P during our steady-state test. We didn't spot any noticeable difference between the two 9-Series drives, but the Optane drives are remarkable compared to other products.

The Intel Optane SSD 905P either matches or leads in every application test, and the 900P isn't far behind. These tests are fairly lightweight and include many applications most of us use every day. Some use these tests to argue that Optane technology doesn't provide enough of a real-world advantage. Operating systems and file systems are designed for hard disk drives, which hinders application performance. As a result, it takes massive improvements in storage technology to see a performance improvement in common applications.

The three Optane SSDs land at the top of the performance list. The new 905P beats the 900P by a small amount, and both 9-Series models hover around twice the throughput of the 8-Series Optane SSD.

We use the same applications in this test, but this time we precondition the drives with heavy data writes to force a steady-state condition. The drives run through several degrade and steady-state passes before we slow things down and intersperse five-minute pauses throughout the workload. The idle time allows the NAND-based SSDs to perform cleanup operations that restore their performance. Intel's Optane SSDs don't need the cool-down time because the drives overwrite old data without a latency-inducing erase pass.

Service time is the measurement of latency plus disk busy time. The two Optane 9-Series SSDs lead the charge here, but the Samsung 970 drives aren't far behind.

This chart measures disk activity during our tests. As you can see, the 905P only works for a small portion of the test. The drive blasts so much data to the system memory and CPU that it sits idle while the other components process the data. This impacts system power consumption in several ways.

The drive is so fast that it can drop back into a lower power state faster than the other drives. Also, the processor doesn't have to wait for data, so it can process it more effectively. This actually increases overall system power consumption for a brief time. If you measured the power consumption for five minutes, you would see larger spikes as the CPU processes data faster, but those spikes result in lower overall power consumption.