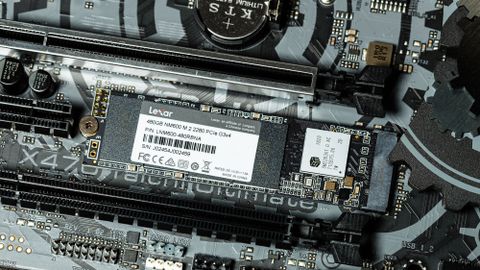 Lexar’s NM600 isn’t a record-breaker, but it delivers speedy performance and is one of the most efficient SSDs we’ve tested. If you're looking for a new budget M.2 NVMe SSD, it's well worth considering.

Lexar, which was bought by Chinese SSD maker Longsys back in 2017, has been busy churning out new internal and external SSDs as of late. Here we're looking at the company’s entry-level NVMe drive, the NM600 and seeing how it stacks up against the competition. The NM600 is poised to displace its SATA competition with aggressive pricing and speedy performance figures. But, does it have what it takes to keep up with M.2 alternatives?

At the core of Lexar’s NM600 is Silicon Motion’s SM2263XT, a 4-channel PCIe Gen3x4 NVMe controller. It's similar to the controller powering the Intel SSD 660p and Crucial P1, but with one catch. The SM2263 utilizes a DRAM cache for the FTL mapping table, while the XT model doesn’t. Rather than incorporate DRAM in its architecture, Silicon Motion took advantage of a rather new NVMe feature called Host Memory Buffer (HMB).

DRAMless SSD controllers have typically offered low performance, especially when taxed with moderate workloads. That’s why HMB came into existence, it tries to speed things up and enable NVMe SSDs to match SATA-level pricing. Instead of using DRAM on the device, HMB technology enables the SM2263XT to utilize a small portion of the system’s RAM as a cache space for the controller’s mapping table. Without the need for DRAM in its design, the NM600 is able to hit the market at low prices and still deliver acceptable performance.

Lexar’s NM600 is available in just two capacities, 240GB and 480GB. Based off of these capacity points, we can see that Lexar opted to give them a little bit more over-provisioning to help with performance consistency.

HMB isn't the NM600's only trick. The drive also features pseudo-SLC caching, which utilizes some of the NAND in an SLC mode for caching bursts of inbound writes. On the flip side, sustained performance isn’t as good as the rated figures. It also supports LDPC (Low-Density Parity Check) error correction code to ensure data integrity and reliability over time. You can also securely erase the device, so if you decide to sell it later on all data will be unrecoverable (or at least not very easily recoverable) by a third party.

Lexar’s NM600 comes in an M.2 2280 form factor, with a black PCB which helps with aesthetics. But the crooked white sticker on top kind of ruins the look at the same time.

In conjunction with the DRAMless Silicon Motion SM2263XT controller, the NM600 features Micron’s 64L 3D TLC NAND flash. With four packages on the top size of the PCB, the NM600 is also a single-sided form factor design. No other components are on the bottom side, which makes it compatible with the few mobile devices that require the thinner size.