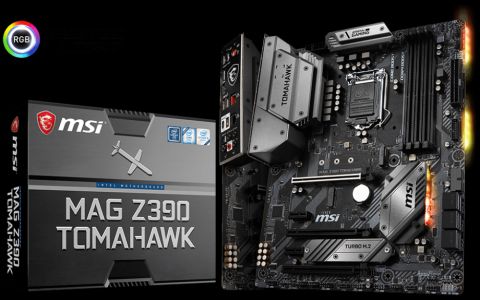 We started today’s test with a bunch of “errant” findings, having only assured that automatic overclocking had been disabled and CPU power-saving features had been enabled. After initially disregarding those results, we continuously retested the MAG Z390 Tomahawk until we got results that wouldn’t have MSI giving us the axe. Those results came by disabling the voltage regulator’s power saving mode, after which we feared a “China Syndrome” moment during our Prime95 max power draw test. So, we started with a new board…and included the results from both the performance-optimized “CPU defaults” and power-throttled “motherboard defaults.”

The MAG Z390 Tomahawk performed like any other board after being “optimized” by disabling its voltage regulator thermal throttling, but that throttling imparted a noticeable impact in its default configuration upon the most CPU-intensive 3DMark and PCMark tests.

It’s tough to imagine why Sandra wouldn’t have forced voltage regulator thermal throttling, except that its AVX load might have been in shorter bursts than would have caused the voltage regulator to overheat. Disabling that throttling helps the MAG Z390 Tomahawk stay at or near the top of our Compubench and Cinebench tests, but enabling tanks those benchmarks. In general, thermal throttling impact is proportional to loaded core time.

Thermal throttling hurts the MAG Z390 Tomahawk’s results in every game, and the board performs expertly with that safety feature disabled.

Our timed applications are either too short, using too few cores, or not AVX-optimized enough to force voltage-regulator thermal throttling on the MAG Z390 Tomahawk. That’ll push the default configuration up in our averages, which is a shame since many of the people who buy the Core i9-9900K need it for long-duration loads.

When fully loaded under Prime95 small-FFTs, the Z390 Tomahawk spikes to around 241W and then drops to around 140W. It also drops to around 3.40 GHz. And that’s not realistic since the CPU is only throttling to around 4.5GHz in several of our benchmarks. And so, we disabled thermal throttling and saw system power draw jump up to 330W.

Unfortunately, we forgot that temperatures over 115 °C were out of range for our thermistor. And so, temperatures kept climbing until the board shut down and refused to boot back up, instead showing a CPU error. No shooting flames, smoke geysers or welding arcs as we’ve seen in previous boards, just a quiet power down without recovery, and a burned thermistor.

Testing with MSI’s monitoring software allowed us to find the sweet-spot, where the voltage regulator would hover around 100 °C at full load at the CPU’s rated 4.70 GHz when running Prime95 small-FFTs.  But that’s when we found out that the voltage regulator heat sink temperature was around 40° lower than its MOSFET (transistor) temperature. Ouch.

Thus, we get efficiency scores that mean absolutely nothing. The board can’t power our CPU to full load without cranking down its core voltage, but doing so isn’t fair to any of the other products.

Having found the one voltage the lets us reach the standard 4.70 GHz Intel Turbo Boost frequency for eight loaded cores…without overheating the voltage regulator, there was no room left to push the CPU frequency upward. Our 1.20V setting is the be-all-end-all, you’ll get 4.70 GHz at the voltage regulator’s limit. Meanwhile, competing boards were fully capable of using 1.30V to push our CPU to 4.90 or 4.95GHz.

We tested the MAG Z390 Tomahawk with Intel’s Core i9-9900K and found that this processor is really outside its capabilities: When the power regulator reached its thermal threshold, it would drop the CPU frequency below its rated 3.60 GHz baseline. Lighter-load users wouldn’t notice that, but then again, why would they need a Core i9-9900K?

And so the low price that looks like a great deal in our price-to-performance table is a terrible deal for anyone who would like to use the Core i9-9900K at its full potential. We wish we were able to recommend such an inexpensive board to Core i5-9600K users, but we simply didn’t have the spare CPU to verify that the board is even capable of pushing that processor’s performance potential. Doing so wouldn’t have been fair to the competing boards anyway…and so, we’ll set aside the MAG Z390 Tomahawk sample that we didn’t burn while we consider options that include a roundup of inexpensive boards that won’t properly support our Core i9-9900K.