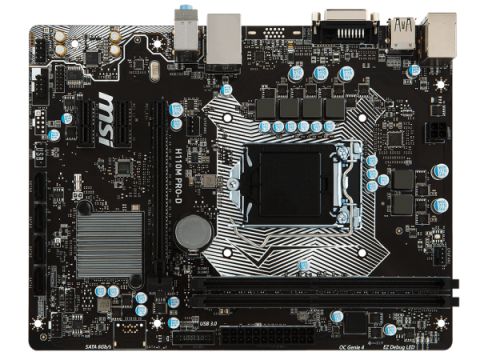 Despite what may seem like a long list of Cons, most mainstream users won’t care about them, but they will definitely appreciate the Pros. If you’re building on the cheap, the H110M Pro-D may have all the features you’re likely to need, especially if you plan to install a discrete graphics card. This board definitely deserves an award; whether it is the specific H110 option I will personally recommend may depend on the power and temperature numbers from at least one more competing product, but this is absolutely not a bad choice.

In the recent How To Choose A Motherboard article, I made an assertion that essentially boils down to “stock performance really isn’t affected by the motherboard.” No one called me on it in the comments, but is it really true? Clearly, I’m not talking about features, and you’ll need a more advanced board if you want things like M.2 slots or support for multiple graphics cards. If you want to build a gaming machine on a very tight budget, do you have to fit a Z170 or even H170 board into your build, or will H110 suffice? Although H81 boards only provide PCIe 2.0 connectivity for the graphics card, H110 provides a full 16 lanes of PCIe 3.0. The difference hasn’t been huge (only a few percent, so far), but it’s there.

Today, I’m looking at a board which shouldn’t take any performance hit at all. I chose the cheapest H110 board (including shipping) that Newegg offered when I ordered: the MSI H110M Pro-D. I’ll be using a more powerful graphics card (a GTX970) in today’s tests, and running the Extreme preset of the Heaven benchmark; and will also run accelerated PCMark 8 tests as well. I put that same graphics card on another H170 board, so let’s see if performance suffered. Since I did not test my previous H170 samples with a GTX970, I’m going to take this opportunity to use the ASRock H170Pro4S - a more detailed review of that board (and its non-S brother) will be forthcoming.

This is one sparse board: there is only a single DVI-D video connector on the rear panel, which leaves a gaping hole where many boards have additional connectors like HDMI, DisplayPort, and/or VGA. This is not a HTPC-friendly board unless you add a discrete graphics card. If you plan to use it in a business box to replace an older system, note that you cannot use a VGA adapter with a DVI-D connector.

This micro-ATX board has an austere and clean layout that was not intended to win any fashion awards; its theme is black and white, with the only color on rear panel audio jacks and USB connectors. There are, however, three diagnostic red LEDs to help identify a CPU, RAM, or VGA issue on POST.

The codec is the ALC887, an upper-mainstream part, with 90dB S/N on the input, and 97dB S/N on the output. While not professional quality, most gamers using motherboard-based sound will find it sufficient. For networking, MSI chose Realtek’s RTL811H gigabit LAN controller.

In the box, you get the board, driver CD, I/O plate, two SATA cables, and… no manual! There’s only a quick-start page. Once again, this board is sparse. The diagrams on this page have call-outs in forty-one languages, and include features not even on this particular board, such as how to install a M.2 card. However, the diagrams are very clear, particularly for the front panel connectors - I found it sufficient.

Beginning from the back, the left edge starts out with the front panel audio and COM1 headers, with a TPM header behind that. Next comes the USB 2.0 header, then the row of four SATA 6Gb/s headers. The Chassis Intrusion header is behind the row of SATA connectors. In the front corner, there are two front panel headers, one for a speaker and 3-pin power LED, and one for everything else, including a 2-pin power LED. The 24-pin ATX power connector is in the middle of the front edge. To its left is the USB 3.0 header. To its right, fairly close to the corner, are the three diagnostic LEDs, indicating VGA, RAM, and CPU issues on POST. The CR2032 battery is between the CPU socket and the PCIe X16 slot, and will not be blocked by a graphics card; the CLR_CMOS pins are next to it, and do not include a jumper cap. The CPU fan header is on the right edge behind the DIMM slots, and the SYSFAN1 header is behind the rear audio jacks and to the right of the PCIe X16 slot. The 4-pin CPU power socket is on the right edge with plenty of finger space around it.

The two DIMM slots accept DDR4, and have latches on both sides. MSI doesn’t list the number of phases on its site, but from the number of chokes, they appear to have used a 4+2 arrangement on this board.

The MSI UEFI is as clean and austere as the board itself ,and the Hardware Monitor even lets you adjust fan settings. As I poked around, I discovered a couple of things where defaults might not have worked.  For example, on one of the screens, Win8.1/10 WHQL Support was disabled, so I turned it on. Also, while the boot page is otherwise pretty typical, this is also where hard drive priority is set.

Next Page Test Setup, Results & Final Analysis
22 Comments Comment from the forums
Be In the Know