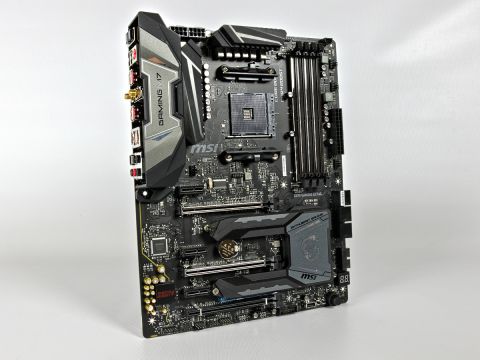 Lucky for us, MSI hasn't deviated too much from their standard UEFI scheme for Ryzen products so we will only present pictures from the X470 board. As typical with MSI, the opening menu graces us with a stylized home screen with software controlled Game Boost, XMP Profile, and draggable boot order right at our fingertips. EZMode is still available with the press of F7 on the keyboard which gives more of a text-based status menu for various devices installed into the machine. Hopping into settings, we can take a look at system information, BIOS or UEFI mode booting, and alter the integrated components on the system such as the LAN controller, SATA modes, and the like.

Off to the OC menu, we find all of the knobs we typically use in our reviews. OC Explore Mode only enables the extra option for Memory Retry Count from our limited perusal, and we are instantly greeted with the mighty CPU Ratio, Downcore control, and Game Boost Function control. BCLK is adjustable on this system which is a nice added touch for some advanced overclocking potential, and Memory Try It! makes its way back into the X470 lineup similar to the X370 boards we've previously tested. A word of caution though: when we selected the DDR4-3466 setting (which our memory supports), the board wanted to change the XMP voltage up to 1.40V which is higher than the XMP profile suggests.

For users of Ryzen 2000 series CPUs, Precision Boost Overdrive is available through the CPU features menu, along with Cool'n'Quiet and other options that would typically be hidden under Zen or CBS menus with other vendors. Digging further down the Overclocking menu, the DigitALL Power menu enables users to select their desired loadline settings along with various voltage and current protections granted through the voltage regulator components on this board. Voltage step-size granularity on these boards are great as expected from a high-end board and memory timings are readily available if tweaking those settings floats your boat

From a monitoring perspective, the MSI boards do both a great and poor job of relaying that information to the user. Taking a look at the board explorer, it is quite valuable that each populated slot on the board is highlighted in a color-matching palette to the rest of the interface. PCIe devices are readily readable by hovering over the device and but digging down further to the SATA or back panel, users can identify the specific device that is attached just in case accessory level debug is required. On the other hand, for some odd reason, MSI decided to implement a blue and green palette to the temperature and fan control monitor which was a jarring experience. It would be nice to have a few more preconfigured fan settings for us lazy reviewers, but the fan control interface is intuitive and the reporting thermal sensors did appear to track the right processor and MOSFET sensors.

As boring as it is to write about UEFIs, it is critical for a motherboard to enable features as advertised on the packaging while presenting it in a manner that is straightforward and reliable. A color miss is a UEFI patch away, whereas menu flow and underlying technology can take a while to fine tune and implement, and that detail alone can separate a good from a great product.

For our purposes today, we provide 5 sets of data, two of which are our boards under test: the MSI X470 Gaming M7 AC and the X370 Gaming M7 ACK placed at the top and bottom of the charts, respectively. For X470 comparisons, we provide the Gigabyte X470 Aorus Gaming 7 tested with the 2700X and GTX 1080, second from the top. The ASRock X370 Killer SLI/ac has been a long-time standard for our X370 comparisons, so it is used as second from the bottom utilizing the 1700X and GTX 970. To make things interesting, we are going to throw in the Gigabyte X470 with the same 1700X processor and GTX 970 data to act as a control-of-sorts. For all value and performance comparisons in charts, we loop in all the Ryzen 2700X data for one data set and 1700X data into a separate set so that we aren’t comparing vastly different performance levels between the two test setups. If that’s all confusing, please refer to the config tables above before writing notes in the comments section.